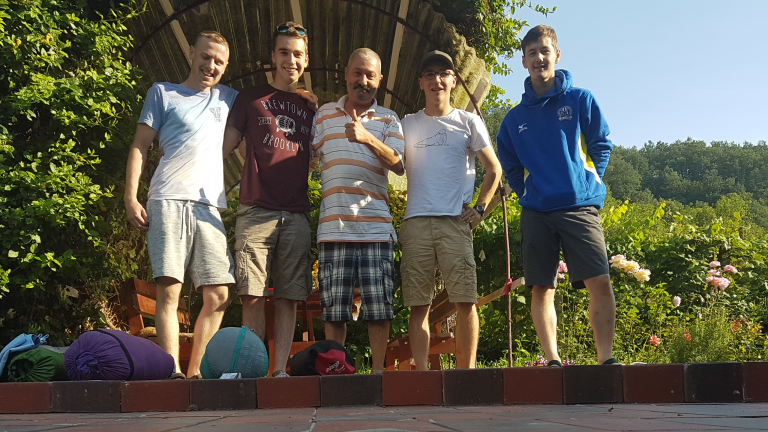 The morning started jovially and we slept in beyond the usual. After everyone enjoyed a good hot shower (and we all respectively enjoyed the fact everyone had showered) we set off, Romania bound.

Somewhere along the motorway we skimmed past the border of Serbia, and if we had taken the exit it would have been a nice little country addition to the list. However, even though we were only about 5 miles from the border, the detour we would have had to have taken would have been around 100 miles due to the unfinished roads. As cool as it would have been to see some Serbian countryside, we couldn’t warrant that kind of time when it was already 3 PM. Romanian roads are notoriously bad. 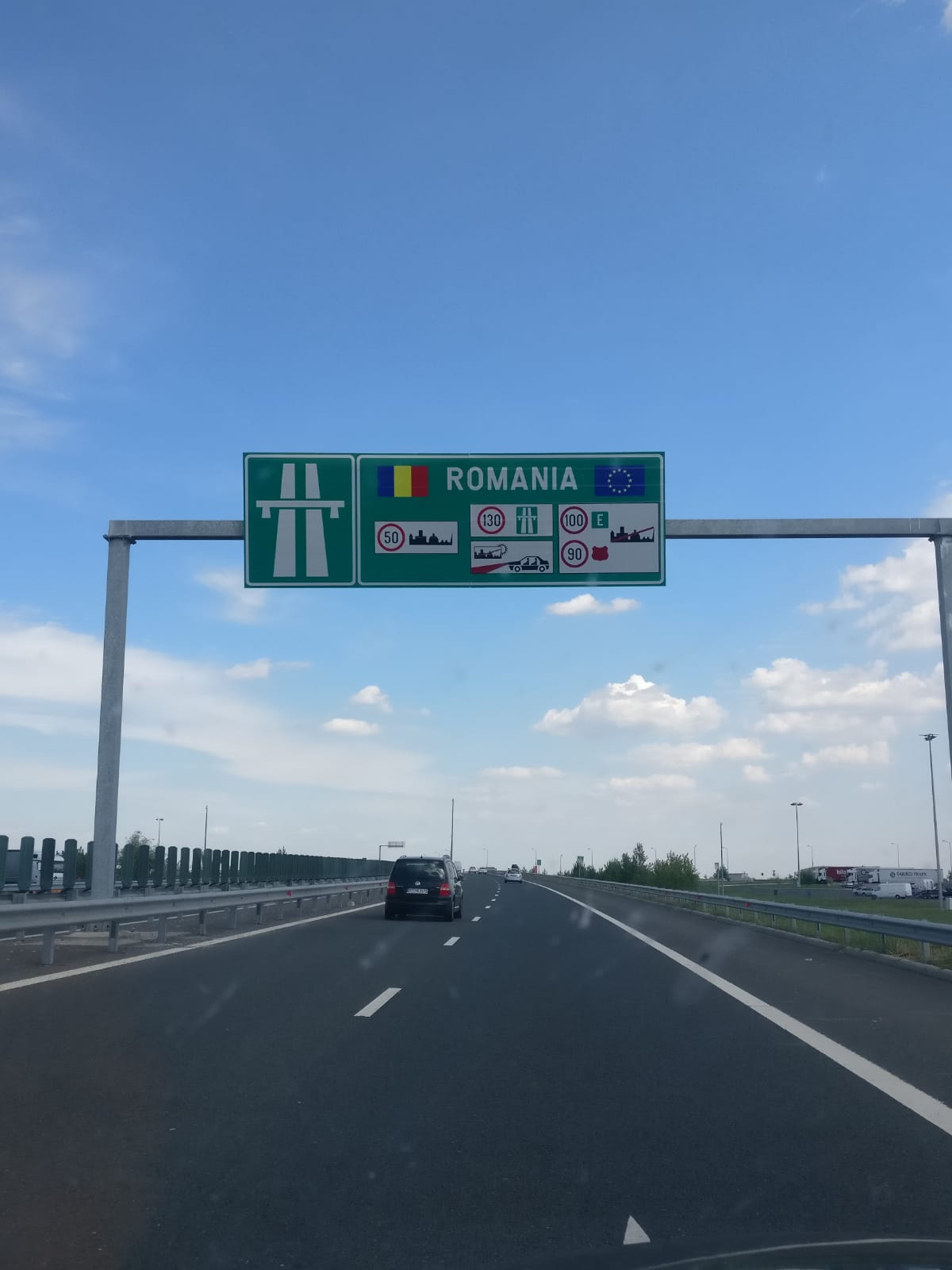 And then we were there! After the border guard made an offhand comment about recognising the car off a certain brand of pornographic material, we were let through with smiles.

Contrary to the general opinion that the roads were bad we sailed through 130km of pristine brand-new motorway. Destination: Deva.

But then, abruptly, the motorway stopped. It just ended in a construction explosion and signs urged us to exit onto a smaller, single lane road. With potholes. A lot of them.

This road led us through some more remote villages, which were far more interesting than the motorway. For example, the first village we came across had this huge abandoned factory: 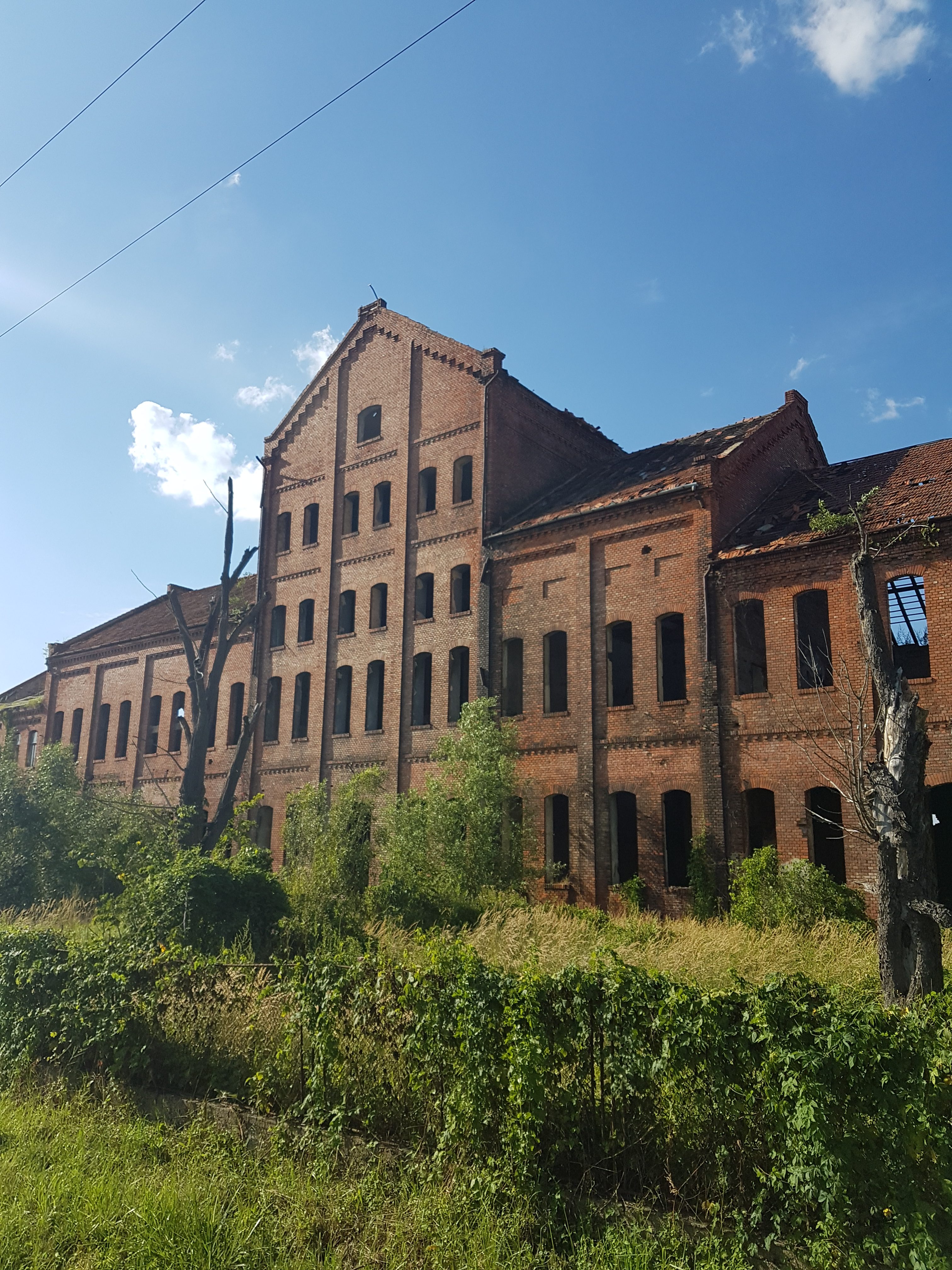 As four boys there was no question that this was being explored. I’m not sure what it is about old broken things but they’re far more fascinating than new working things. 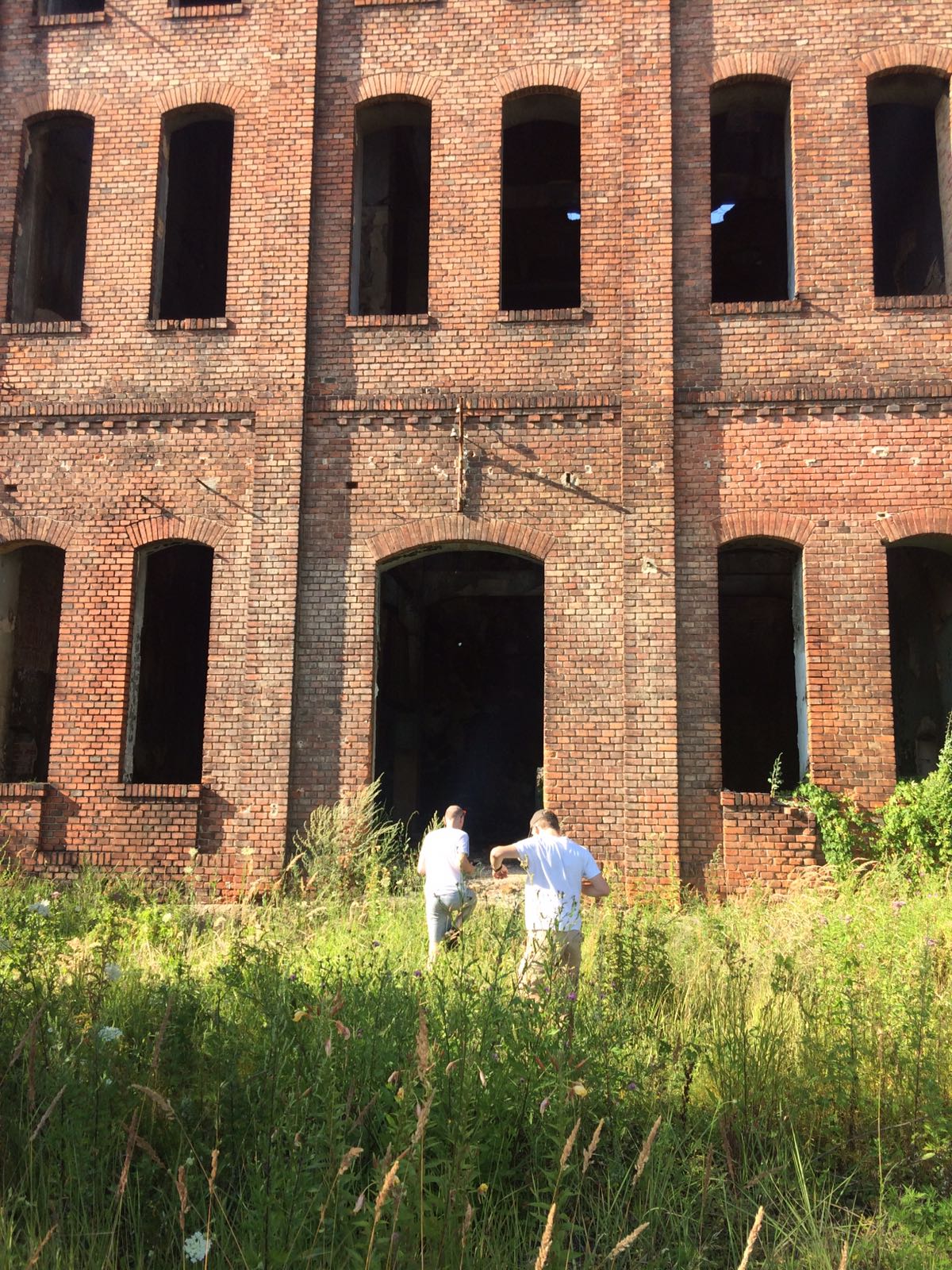 It was an absolute monster of a building, but we had no idea what it did. The one thing we found in it were huge piles of what seemed to be tree bark, rolled up into little tubes the size of a hot dog. It also had a massive chimney, which we wanted to climb. 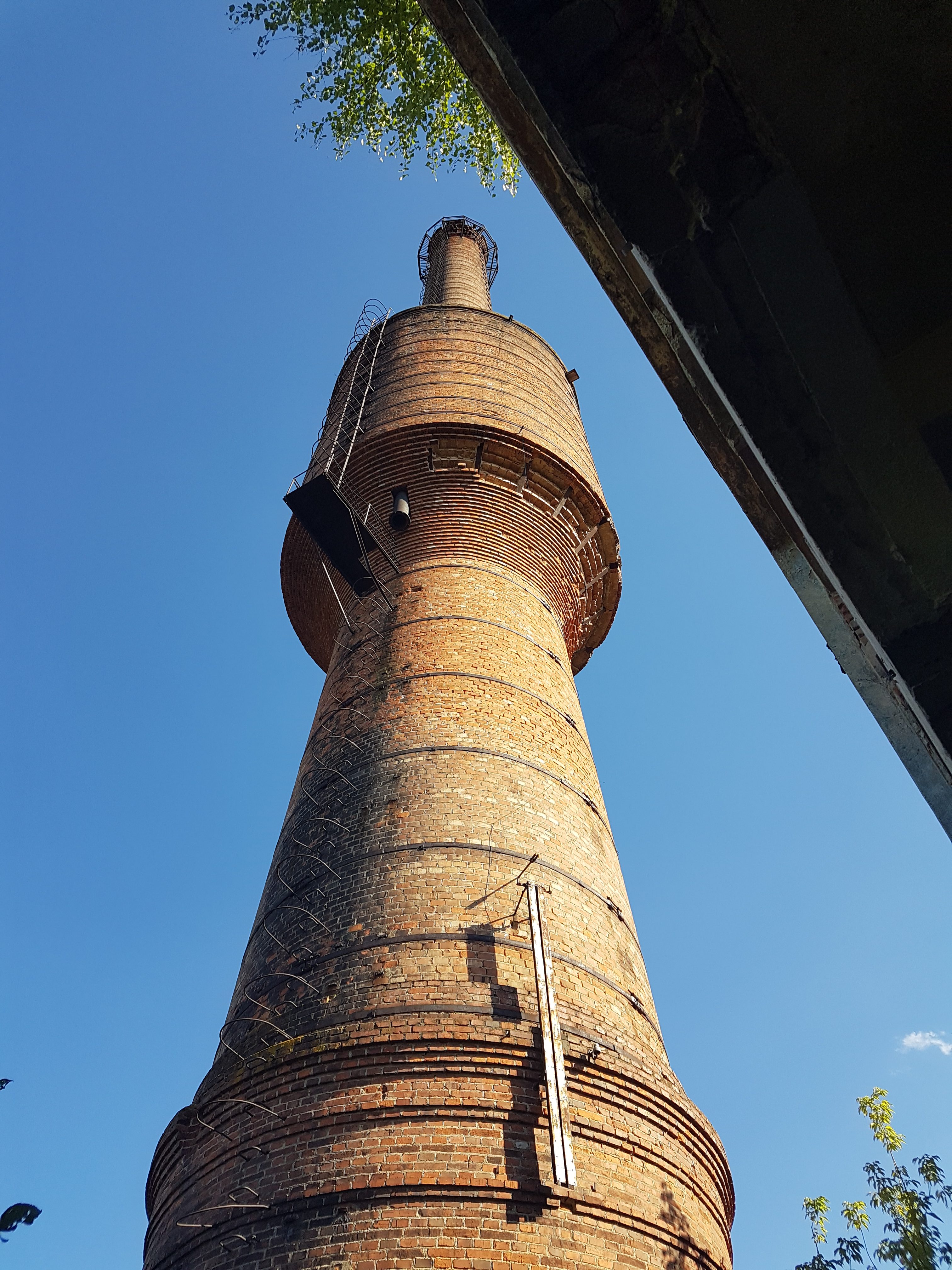 Luckily for our parents, the lower rungs of the ladder had been removed to stop any such vertical exploration. It was still an amazing site, and it seemed almost untouched by the withering hand of time.

Afterwards, the road wound into the hills which were all covered in lush green trees. It almost felt Amazonian. Not that I’ve been to the Amazon, and I doubt it has many roads, but i feel like if it did that’s what it would be like. Tarmac stretches had been carved into the sides of the hills, allowing quick road access between the small villages which all seemed to consist of about 10 houses, 2 caravans and a bar. 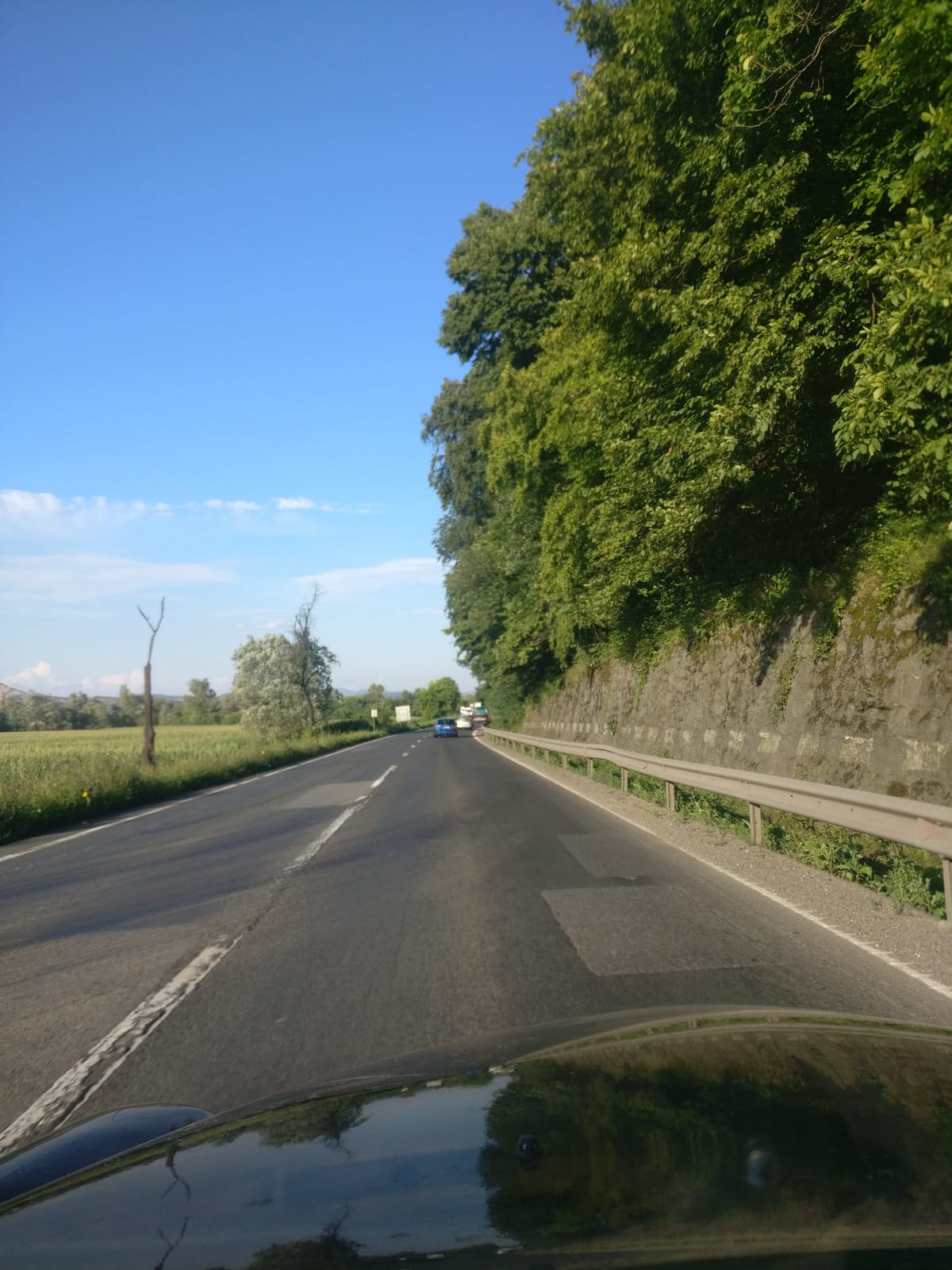 After accidentally driving through the town square to the amusement of the locals, we headed to the hills in search of a campsite. Russell had seen a small independent-looking road that led out of town. We went up it, and it quickly became a gravel track that led us deeper and deeper into the forest, as well as higher up into the mountain. As deep as we went, all of the land was owned by someone or was on a steep hill. Two things that make it difficult to camp. On top of that, dogs patrolled the premises acting as security systems and alarm bells. The track only got steeper and eventually we had to cut our losses. It was a noble effort by Tina, however it was unfruitful.

We swung back and coasted down the hill in neutral, as the automatic gearbox in Tina tries to pull you faster and faster if she’s in gear. We tried a few more small roads and realised it was hopeless. Everywhere was owned. Accepting this futility, I pulled over and asked a man where we could camp. He almost laughed at the idea of us camping in this area, and pointed us to an area about 2 miles away.

By this point it had been about 30 minutes of searching and it was getting very late, we were all tired. It was an all or nothing drive back out of town to find any flat area of grass we could pitch our tents. The irony was starting to settle in, Romania was the only country we had been to where wild camping is legal and it was proving the hardest to find a good spot.

The location the man had suggested was a muddy building site, fenced off. No good. It was getting darker and we didn’t fancy night pitching. At the moment, we had no choice though. We went deep into the countryside and for another 40 minutes found nothing which was not obviously owned or accessible. The situation was bad and in a last ditch effort we spotted some space in an orchard in front of a house which was going to have to do. Not ideal, but neither was waiting any longer.

A man walked into the house, and our attempts to speak to him were batted away with hand gesture. Then a woman came, and it was clear she wore the trousers. She looked pissed off. At this point, the tents had been pitched and food was on the go, we weren’t about to move it all unless told to.

And then Dan came. 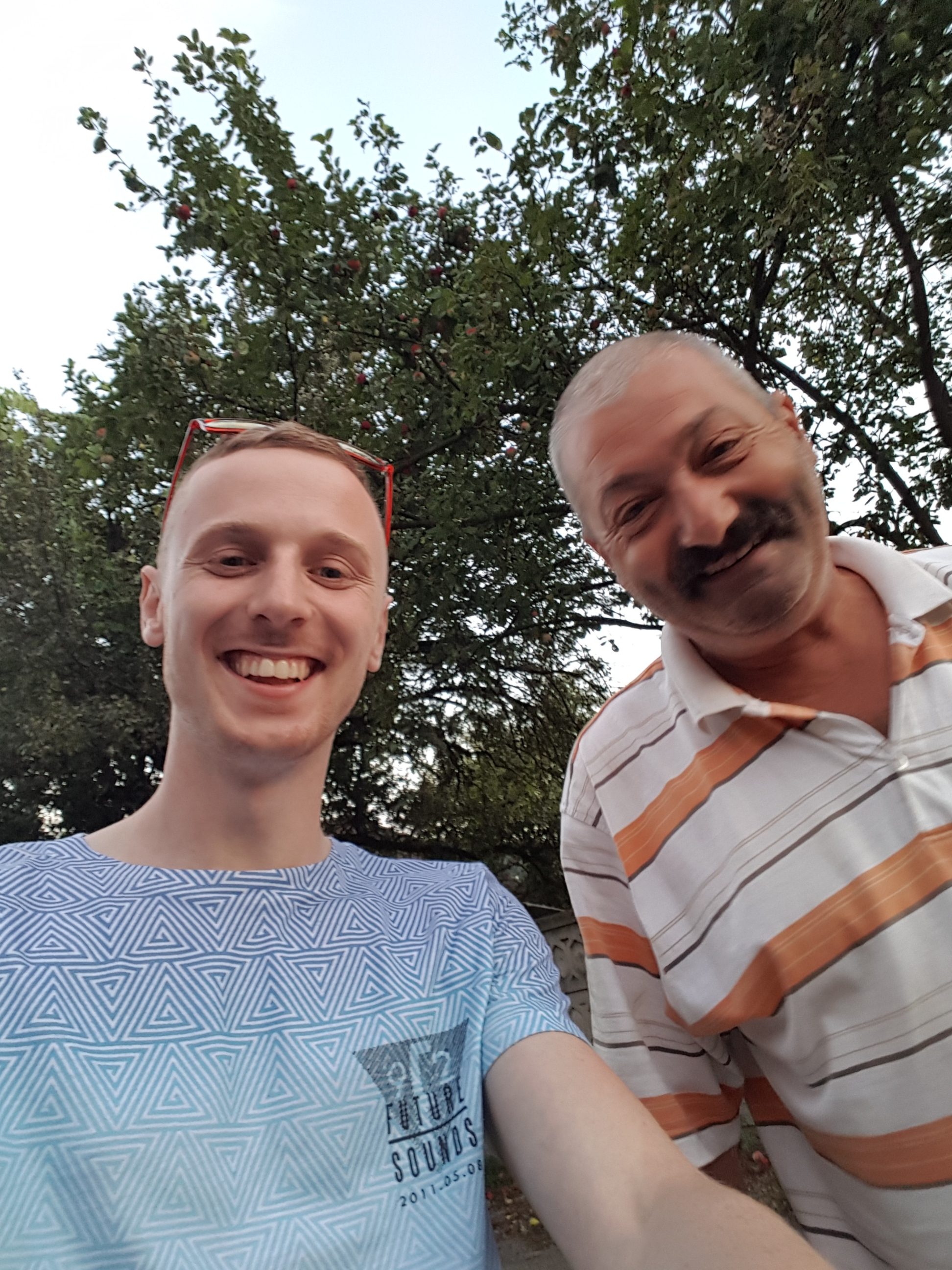 Dan stared at us while we cooked, and I approached him. I offered him dinner with us (we didn’t have much and the others were a tad annoyed about this) but he declined. I’ve been around a bit and have learnt that food can often be the catalyst of the best stories.

His level of English meant hand gestures were the best form of communication, but I quickly developed some kind of connection. I explained my name was Peter but he heard Pizza and I rolled with it. Easier, simpler, and a shared source of amusement.

The woman came out, angry. After some Romanian conversation between Dan and her, Dan explained she had called the police to report us. He had said we were friendly but she didn’t care. She wanted us gone and that was that.

So then Dan did what touched all of hearts, and he said we could stay at his. He said he lived 15 minutes down the road in a big white house. We quickly ate, packed up and set sail, with every car that drove past making us work just that little bit quicker.

We arrived at Dan’s house, all slightly cautious.When we got there, he was hanging out his house window waving. While doing this, he was having a cross-window argument with his mother, who clearly disapproved of four 20-something year olds sleeping in the house. Not knowing whether he won her over or she gave up, he ushered us in to his garden, offering us food (cheese) and a floor to sleep on.

There was barely enough space for 3 of us, so Harry and Smithy went down into the kitchen and Russell and I on the floor of his room. It was about 11:30 PM at this point, but the conversation didn’t stop. Aware we needed to sleep for tomorrow’s crossing of the Carpathian Mountains, we listened intently but tried not to keep the conversation going for too long. This is where Dan told us the brutal truth about his life.

When he was our age, he was working in the coal mines. Long ours, shit conditions, shit money. One day, his group of 10 including him were mining when they hit a gas nerve. The company didn’t provide any safety equipment, they were focused on profits. Of the 10 friends/colleagues mining that day, Dan was the only one that managed to escape with his life. 9 of his friends, dead. I cannot imagine what this would be like. If 9 of my closest friends were taken from me at this point in my life… Well I don’t know. Its a level of tragedy I cannot even imagine.  17 children were left without fathers. And when he emerged from the mine, alone, the management didn’t care. He demanded gas masks be down there. They sacked him.

For a man who has been through so much shit in his life, to have the warmest of hearts, is just incredible.

When we woke up, he had prepared a selection of his homegrown vegetables to give us, and some cakes. He had made us coffee.

I don’t think I’ll ever forget the generosity of Dan, and I have promised to call him when we arrive wherever it is we arrive at the end of this trip.