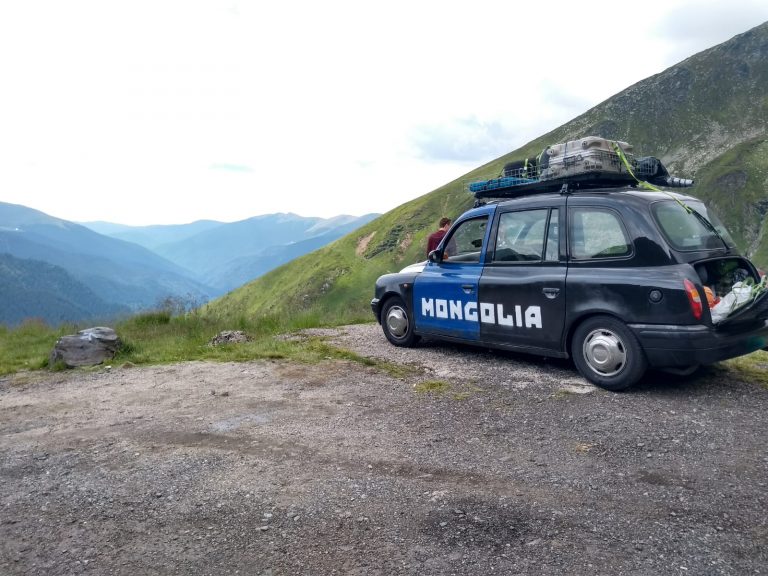 Another cigarette rolled out of Dan’s machine as we slept. He had awoken at various points in the night to smoke. It didn’t agitate me though, the more I thought about it the more I sympathized and ultimately admired the man. He had gone on to tell us how he works 16 hour days in a construction site for £20 a day. Having been through what he’s been through, I’d be proud to only have nicotine as the side effect.

We said our goodbyes and left, with his signature proudly emblazoned on the boot. Today was the day, the transfagarasan highway day. Clarksons “best road on earth”. Whether you like the man or not, you can’t disagree with him about roads. He basically lives on them.

Before going up the first ascent, we preempted Tina’s overheating. Her heating knob is broken and so we have to manually open the bonnet and turn the heating valve to max cold every day. The constant vibrations of the engine cause the valve to slowly open, meaning by the evening our feet are bathed in an unbearable jet of hot, diesley (a word?) air.

But for Tina, our dearly beloved, we decided to sacrifice ourselves. We turned the heating on max, so the air would be drawn away from the engine and into our hot sweaty, bodies. As the driver, this was particularly uncomfortable so I decided to apply some of my questionable engineering skills to solve the problem. In the factory the previous day we had found an L shaped pipe. I blocked the driver fan with tape and piped the hot air out the window, with Smith’s help. 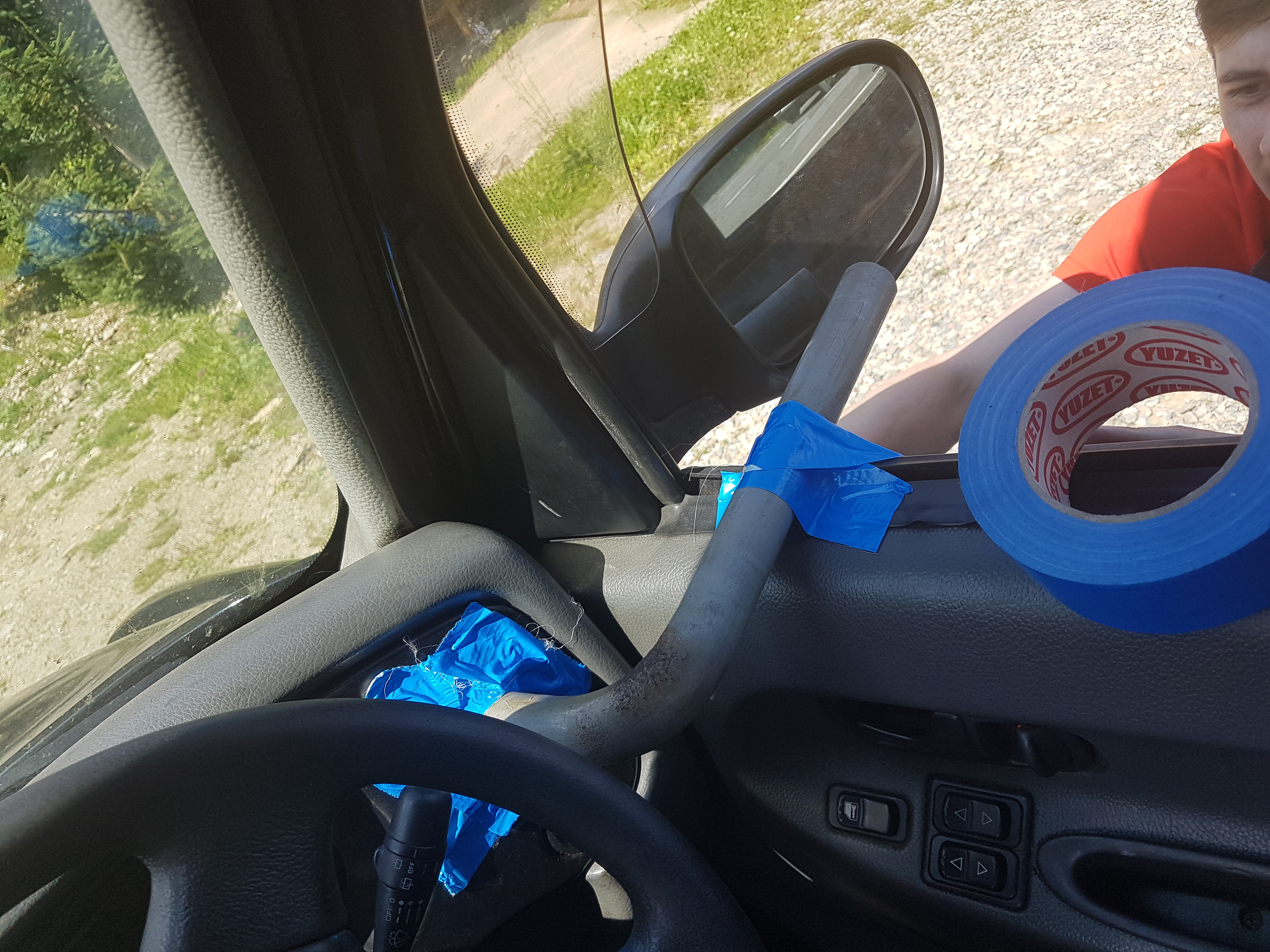 Genius. Of course, as soon as we stopped to take pictures and opened the door it ripped all of the tape off the fan and rendered the DIY heat extractor useless.

Next was the actual ascent, which was breathtaking. 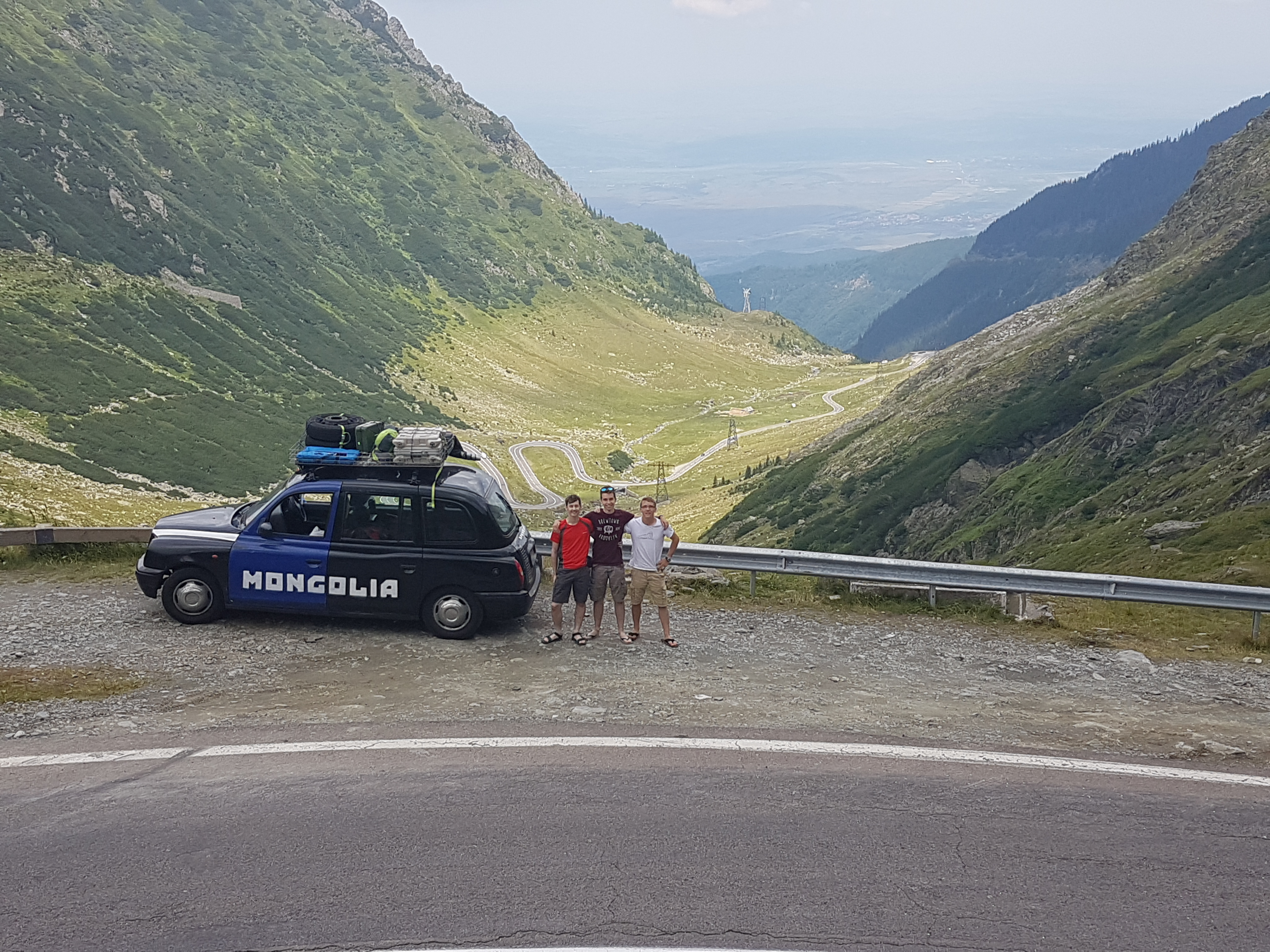 Tina did exceptionally well, barely reaching half way up the thermometer. So proud.

There’s little more I want to say other than this is the greatest road I have ever driven, and I feel absolutely honoured to have done it in such a magnificent machine. Tina gets a lot of attention everywhere we go, and people would often cheer us on as we go past. The feeling that the world is routing for you is exhilarating and we are all elated with how this journey has gone so far. But anyway, pictures. 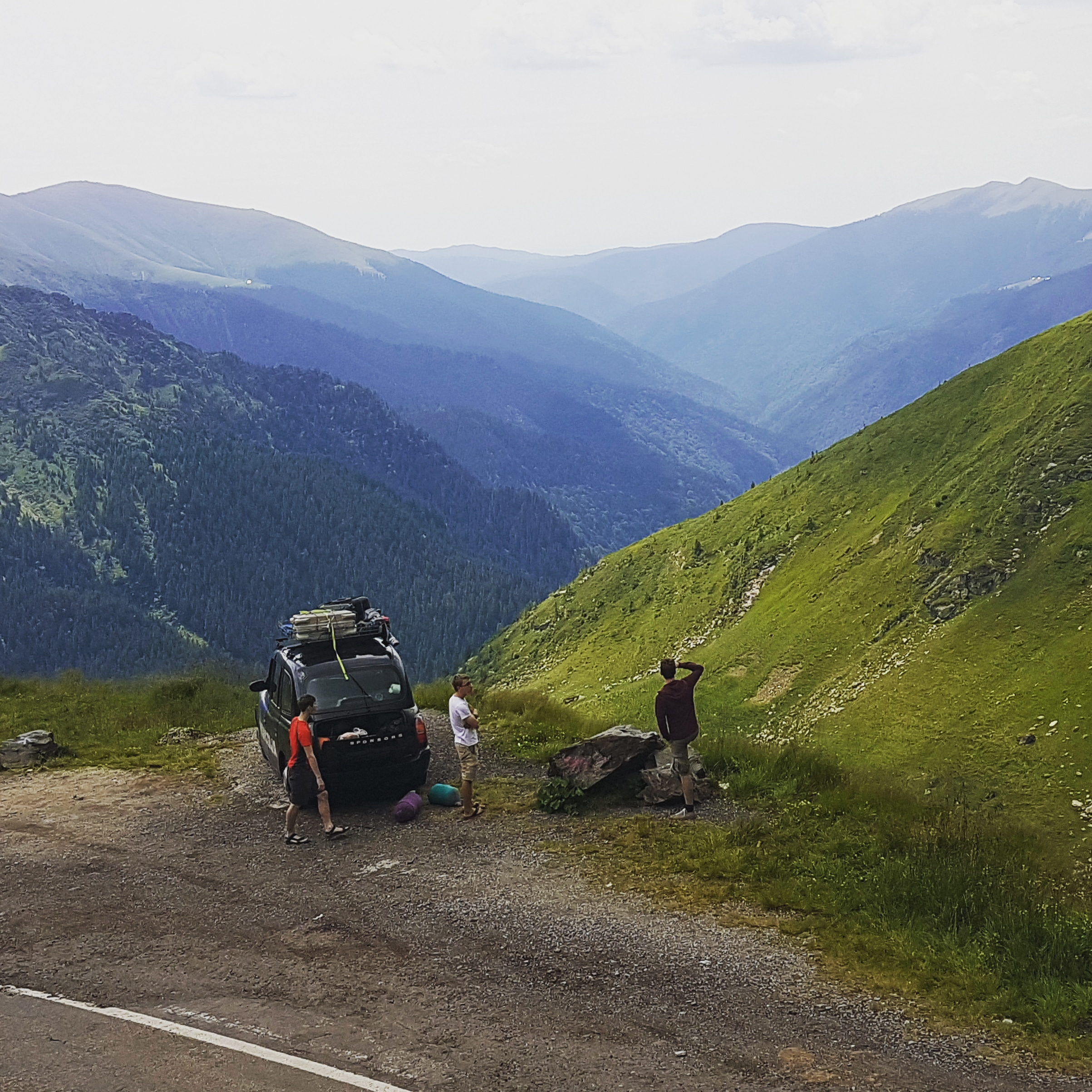 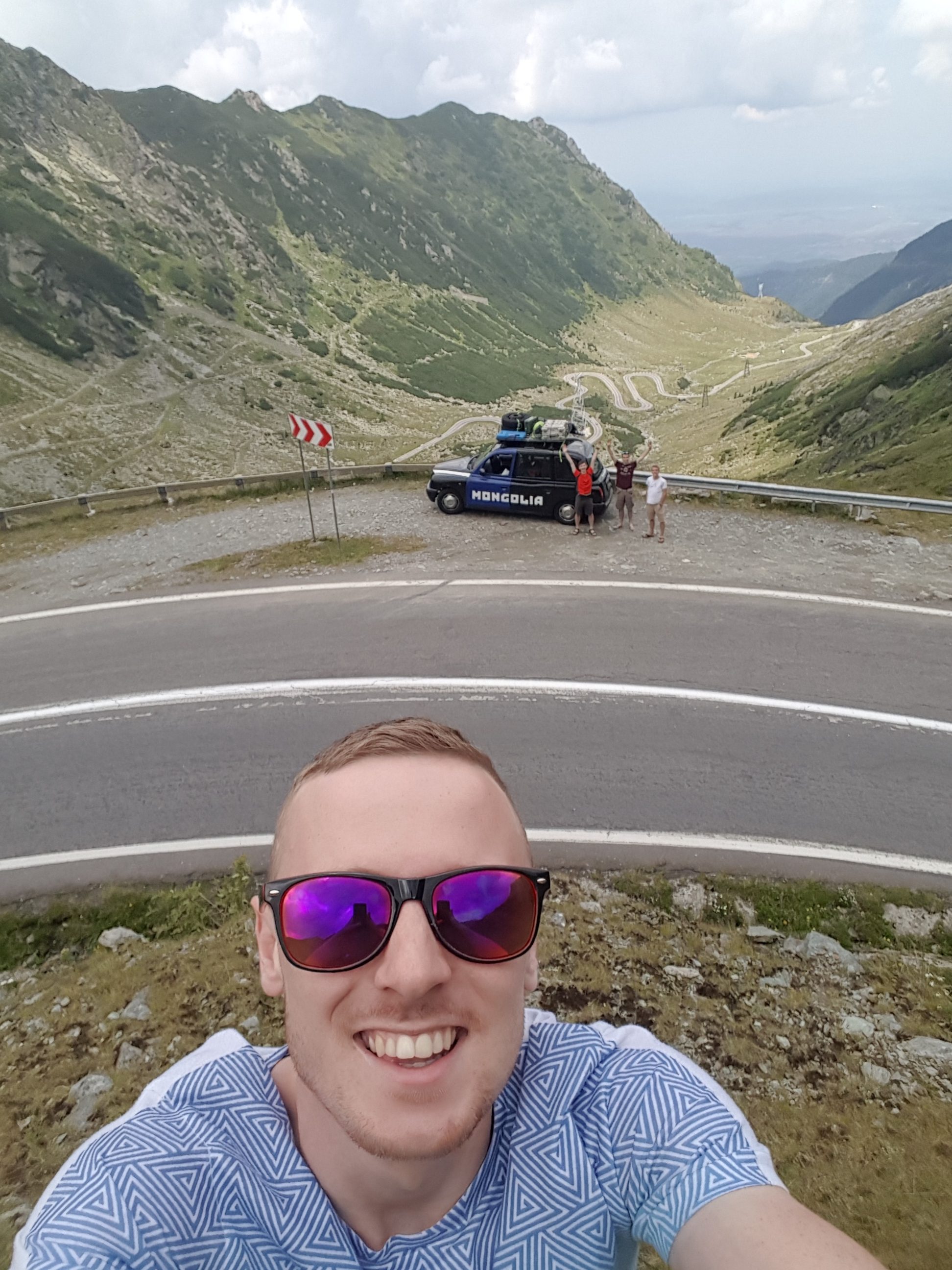 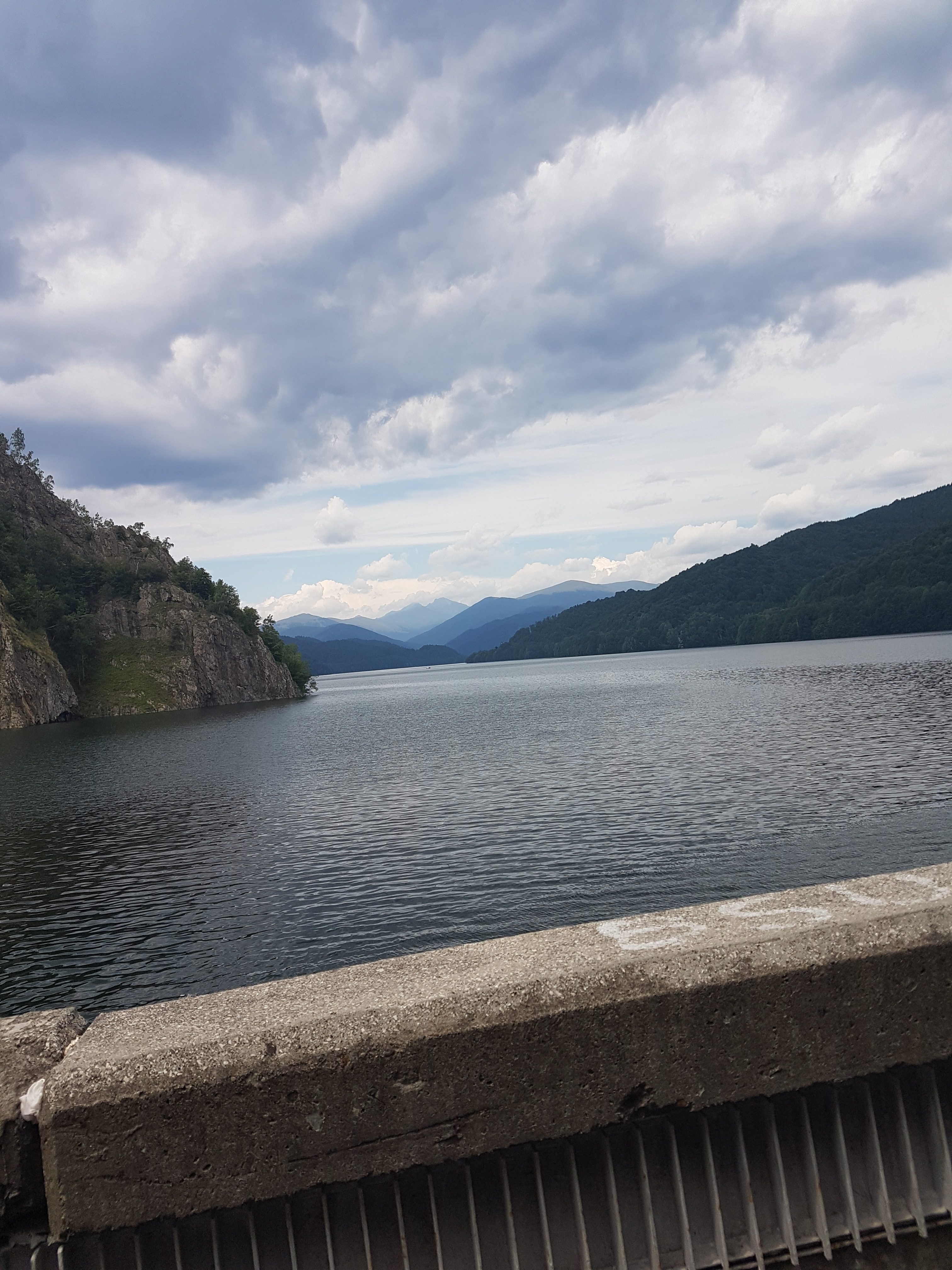 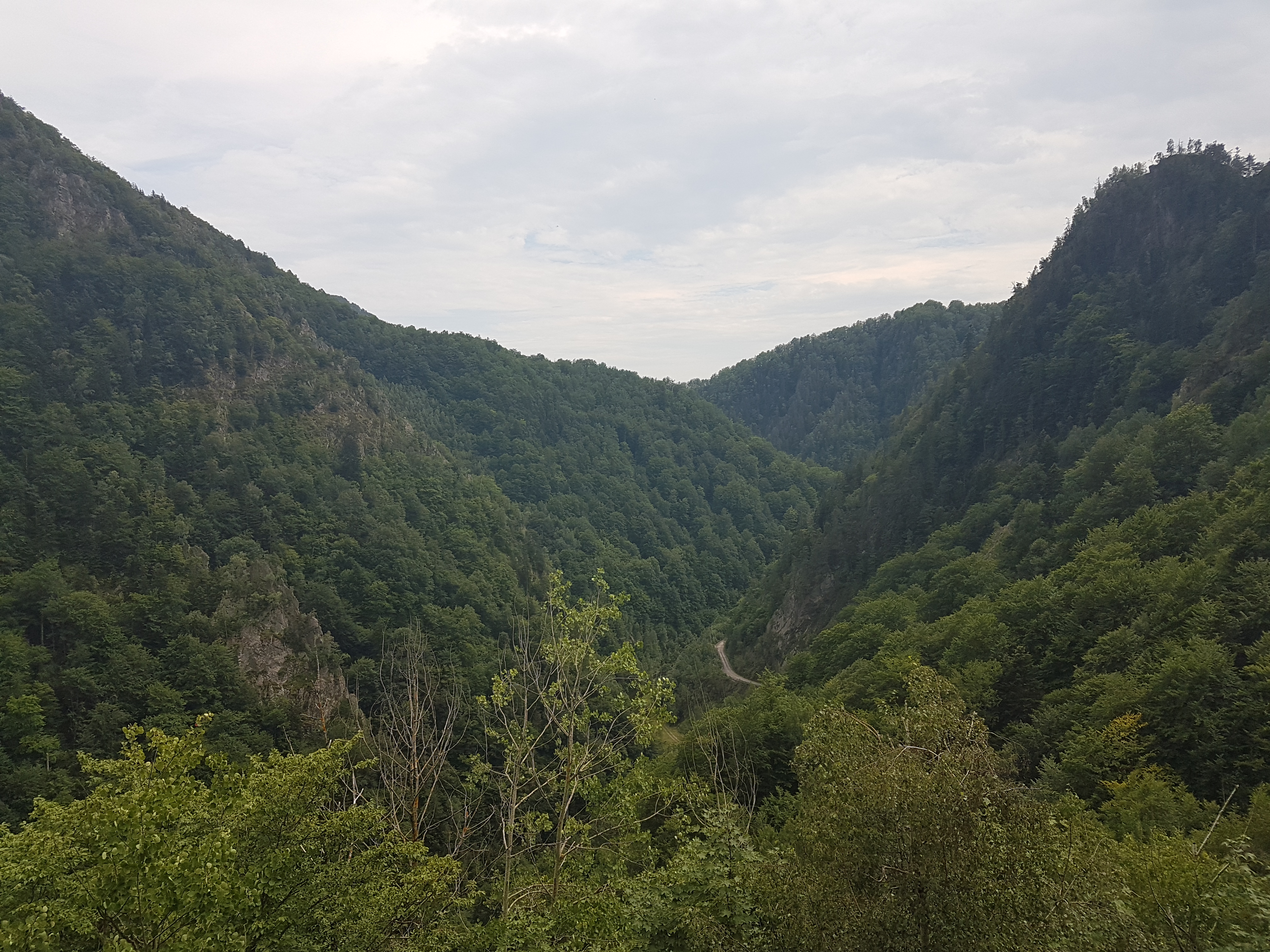 The remaining journey down was equally as beautiful and the whole drive could not have been better.

In stark contrast to yesterday, we arrived at our destination on time. A small town called Bolintin Vale just off what seems to be the only decent road towards Bucharest. We went to the outskirts and began hunting for the prized hidden-flat-unoccupied land we could set up camp on. Along the country road we saw a woman picking and cleaning seeds from an enormously large pile other seeds. I jumped out and went straight to the point (Picture lots of hand gestures with these words):

Ingley no, get translator.

She went off to get her husband, who came back.

By some miracle, I conveyed our desire to sleep in the adjacent field.

Well that was the message I received, and he had indicated a space in front of his house. Okay, fair enough, permission to sleep anywhere would be a blessing after last night. We set up camp and began cooking. 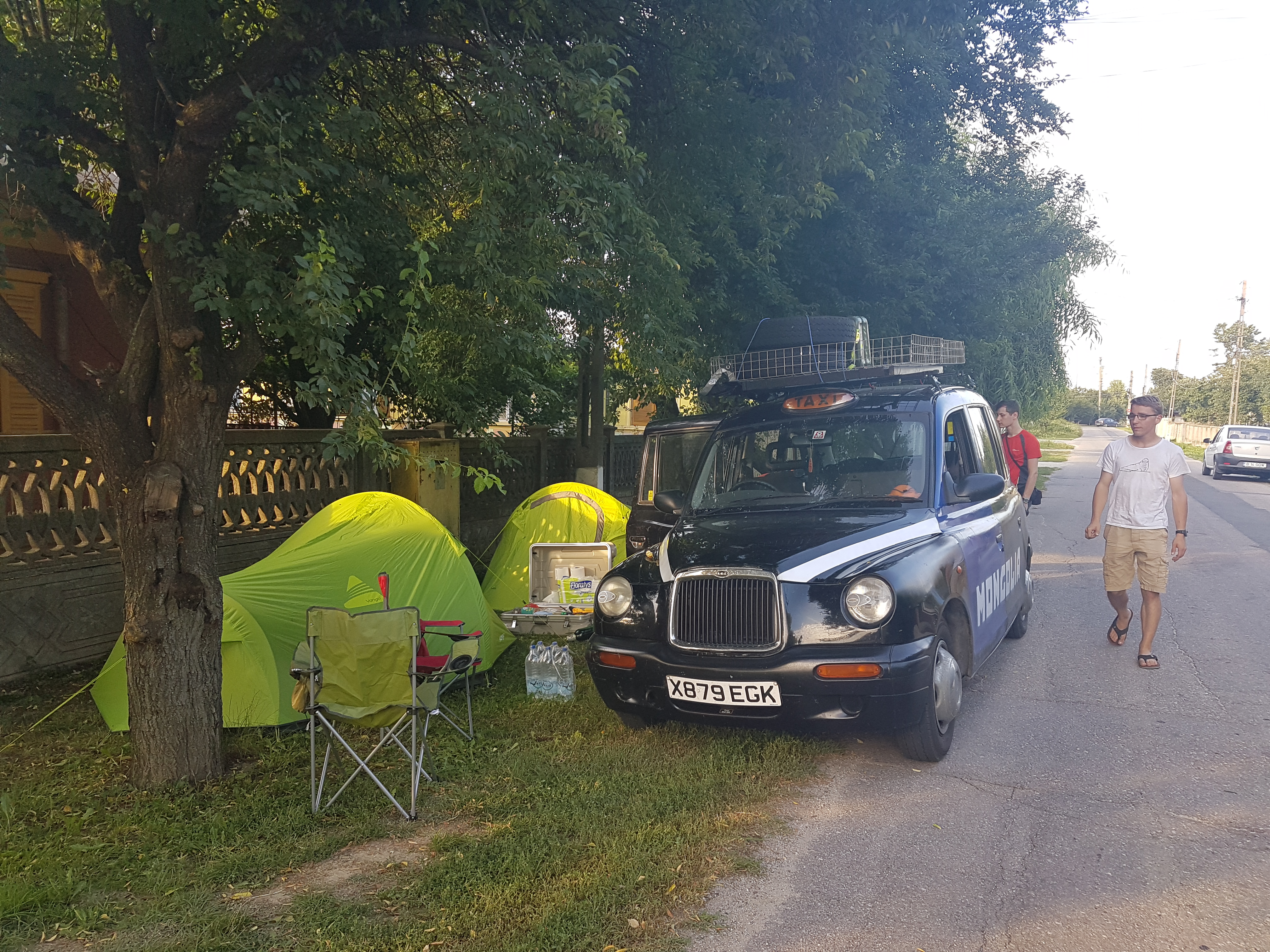 We quickly went to the shops to get him some beer, and then he invited us to eat our food on his table. It was kind, and we attempted to have conversation about a whole host of topics, including Brexit. The struggles were real but I now know what cat is in Romanian. And turkey, chicken, pheasant, cockerel, and other such poultry. This was because his garden was full of them. 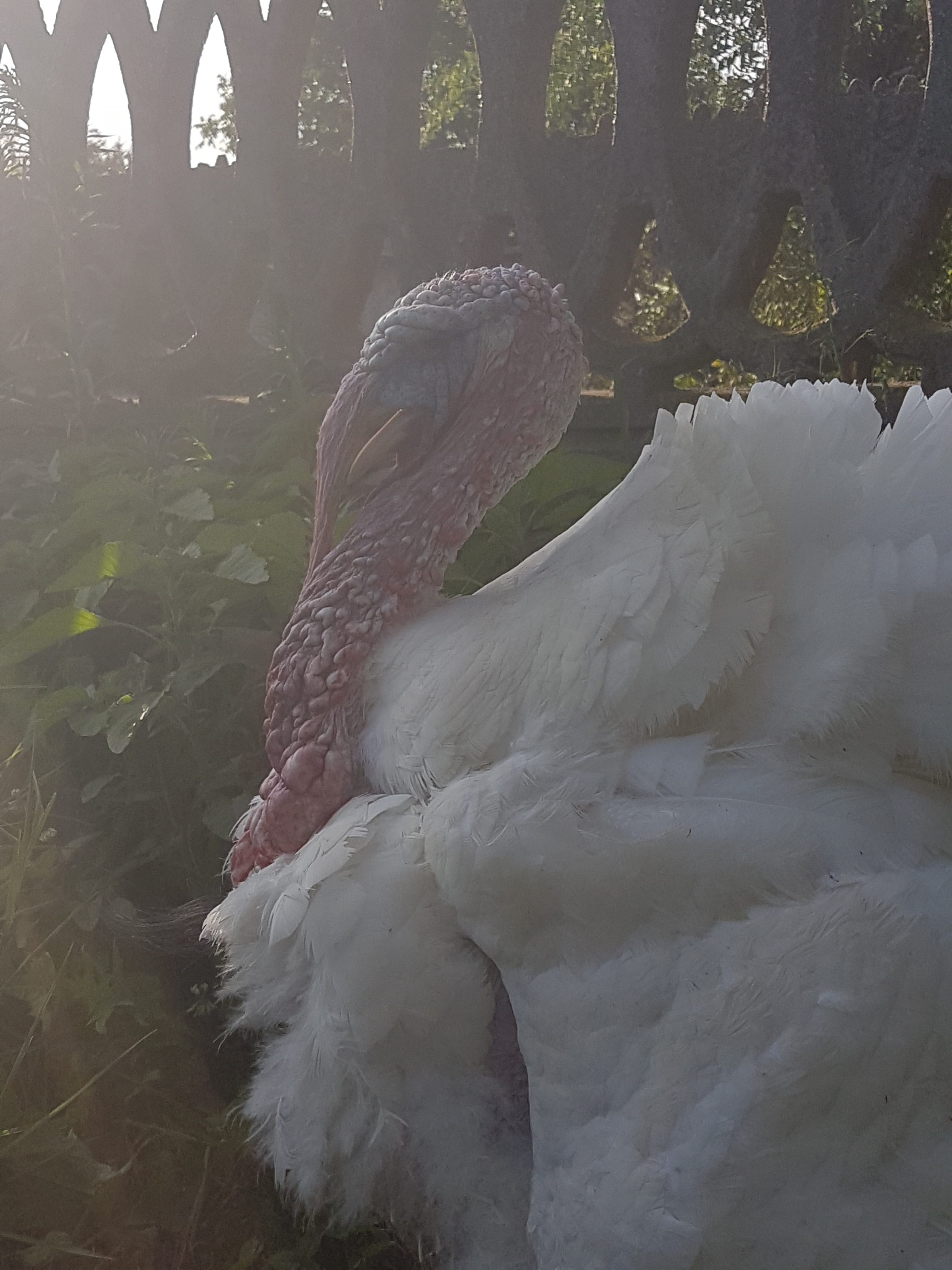 He brought us vegetables to have with our meal from his garden, and he chopped up a watermelon for dessert. 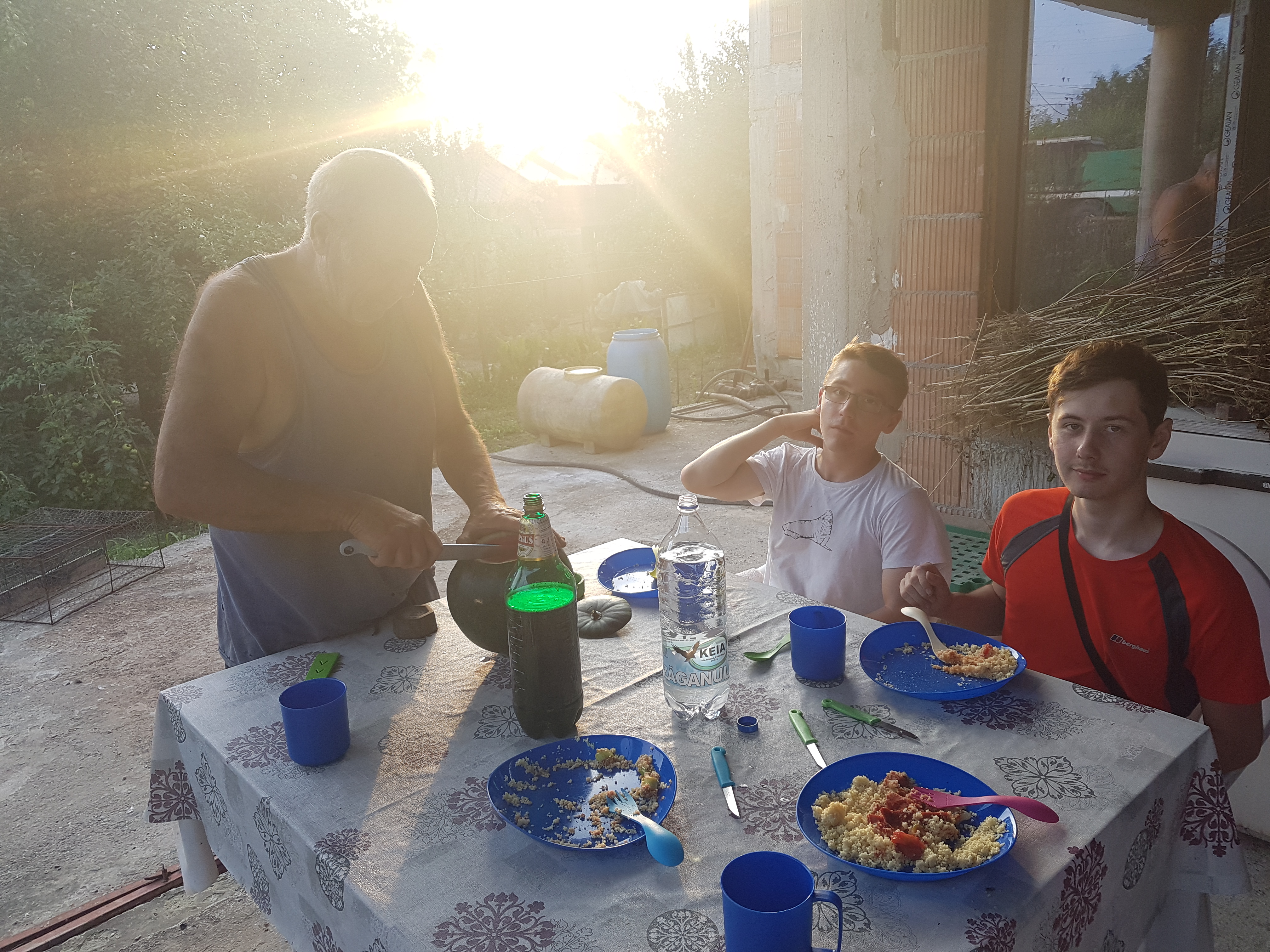 The setting was I perfect, but the town quickly learnt about our arrival, and more specifically Tina’s. They began gathering round, and bringing gifts in the form of breads, compotes, fruits, juices. Everything they had. It was crazy how welcomed we felt. And they loved Tina, she was the star of the show. 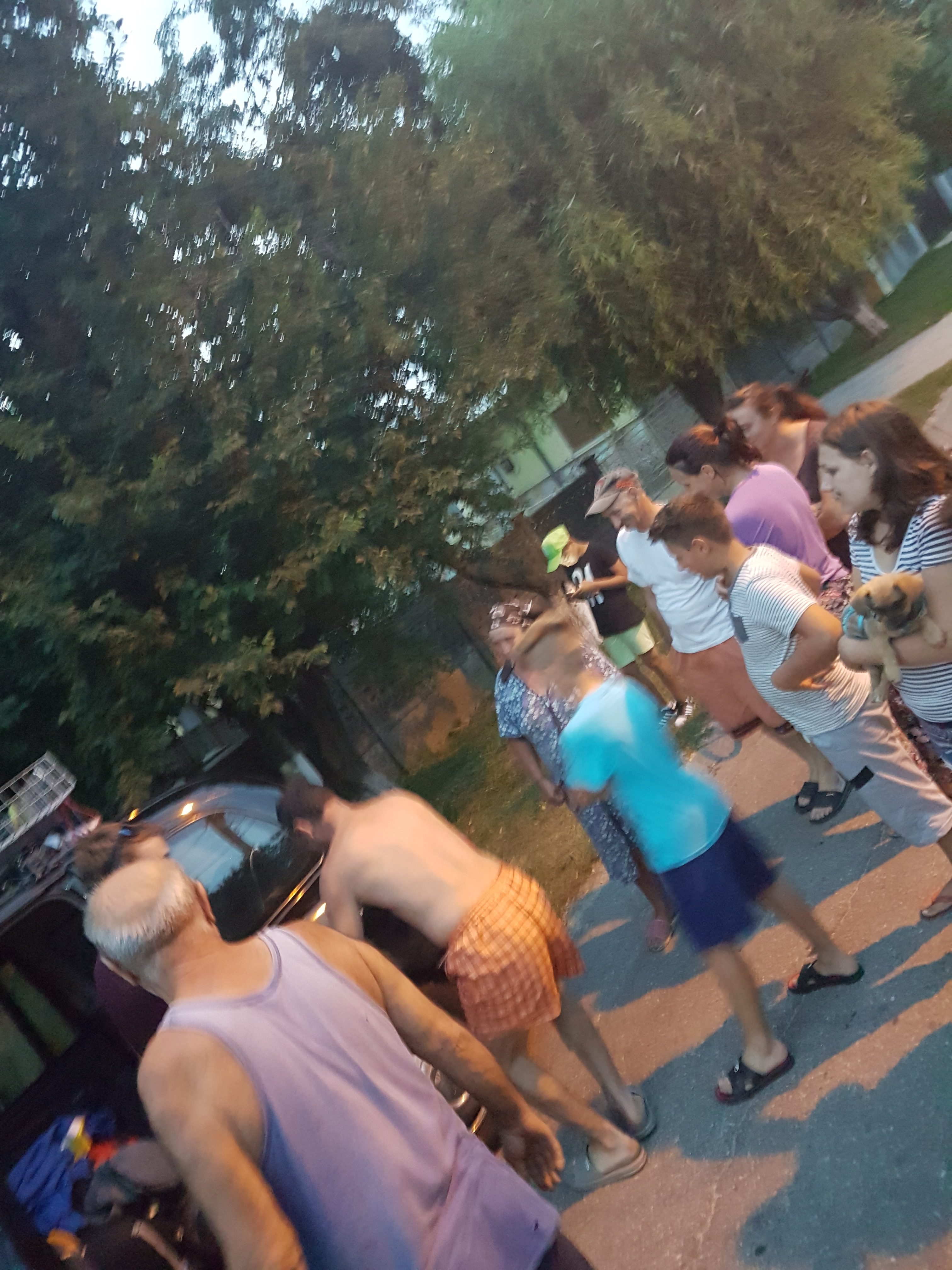 Harry, the superstar, was even being asked for selfies… 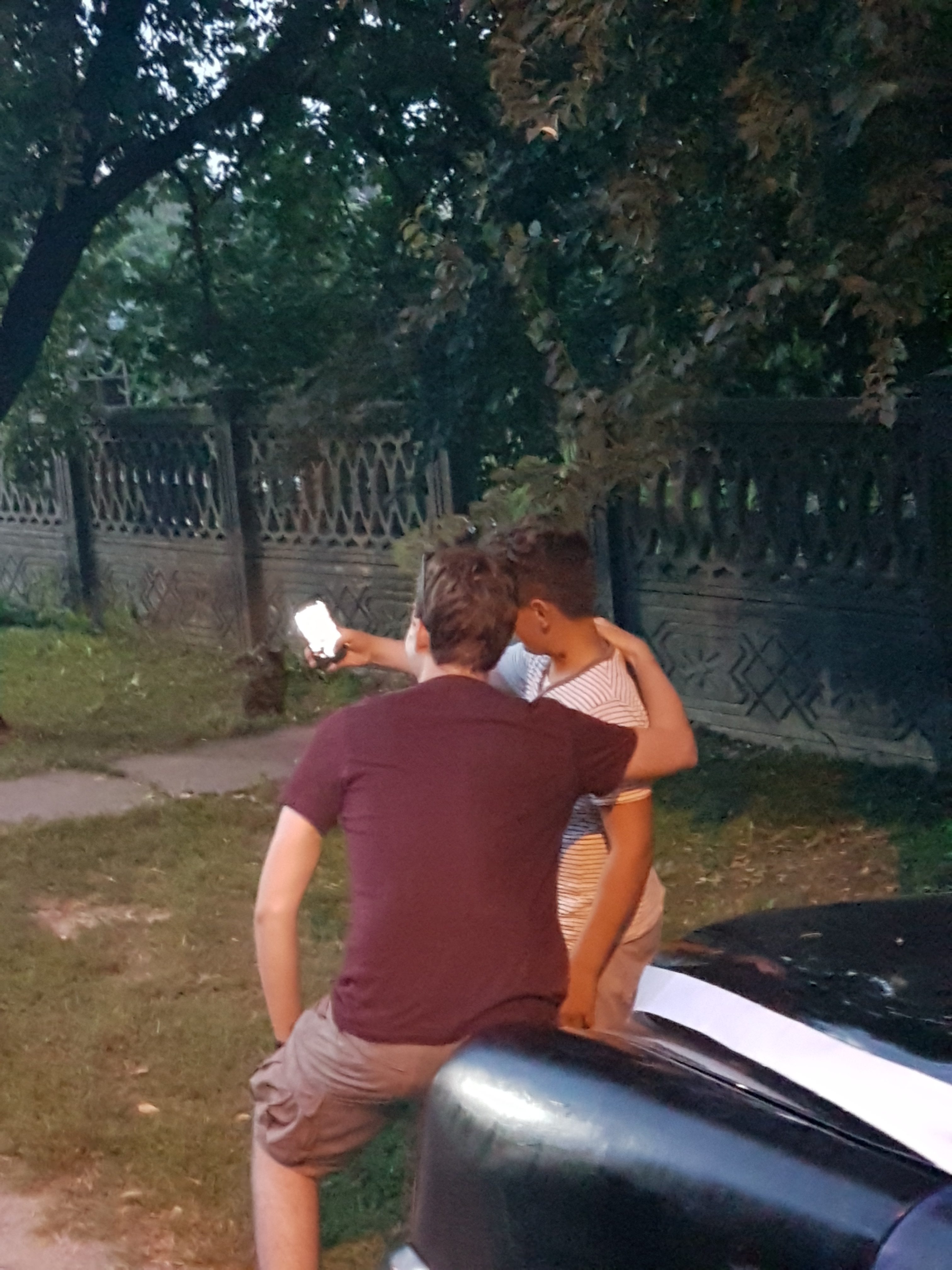 The wife of Stan, the French speaking Romanian man allowing us to eat in his yard and welcoming us, and the original woman we met picking seeds, pulled me into her house. She didn’t speak a single word of English, but with the universal language of gesturing I understood her meaning. They were constructing a new house in the garden which was nearly finished. She wanted the four of us to stay in there.

In the new house they hadn’t moved into yet.

I am writing this from the arm chair of our Romanian mansion, where it is just the four of us, playing liars dice.

The hospitality in this country has been second to none, and I underestimated it severely. Romania has been beautiful, kind, caring, friendly and unique. I will be sad to see it go tomorrow, and I vow to return one day.

We leave in the morning with a taxi laden full of Romanian foods and with smiles on our faces. So far, this expedition has been the greatest decision we have ever made. I am content.

1 thought on “Language is never a barrier”