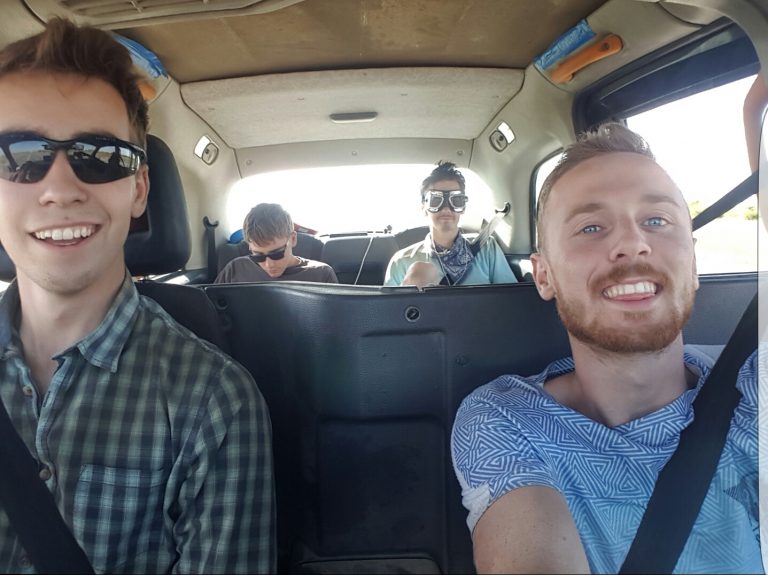 What a week. It finally feels like the term rally is appropriate.

On the first day we covered an easy 600km over perfect roads, breezing past our target for the day. It was an odd feeling when we started to come across camels, and we realised again the length of this journey and the environments it covers. Road-sense remains to be discovered by four legged mammals in these countries. 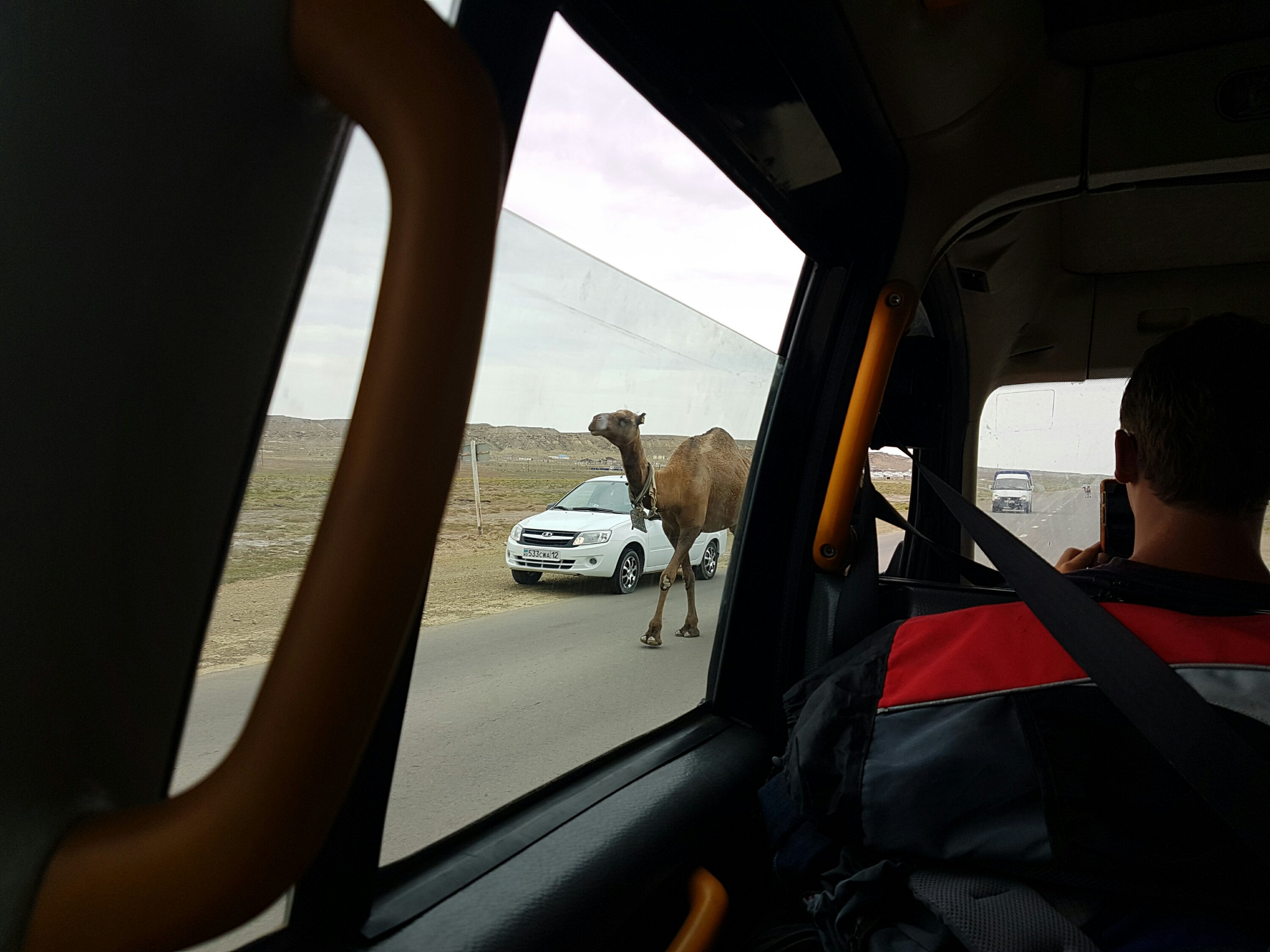 We set up camp just off the main road (which had about 5 cars an hour) and Tina, majestic as ever, posed for the shot. 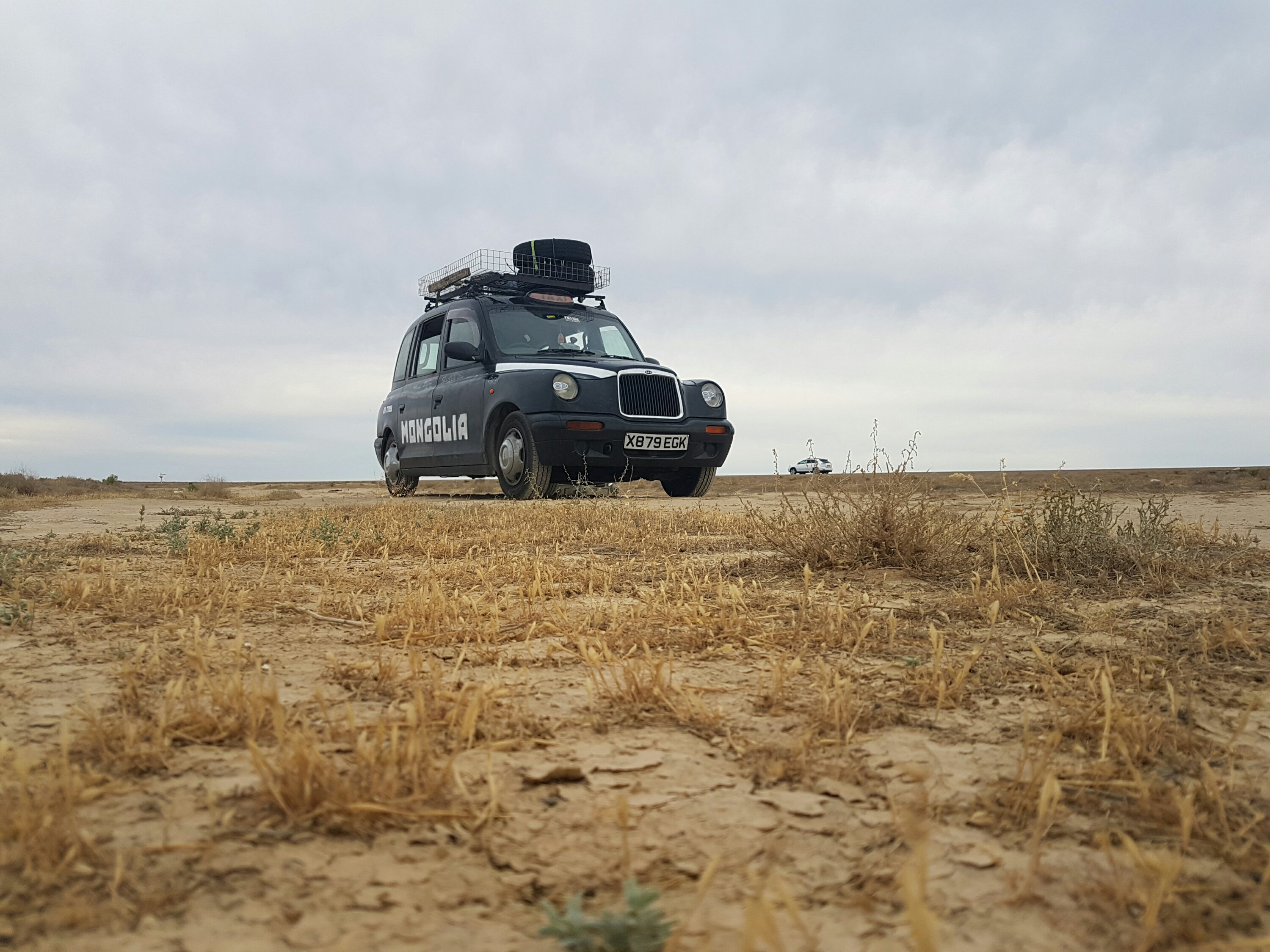 After a short while, dinner had been consumed, warm beers were in hand and the sun was setting on our first night in the desert. 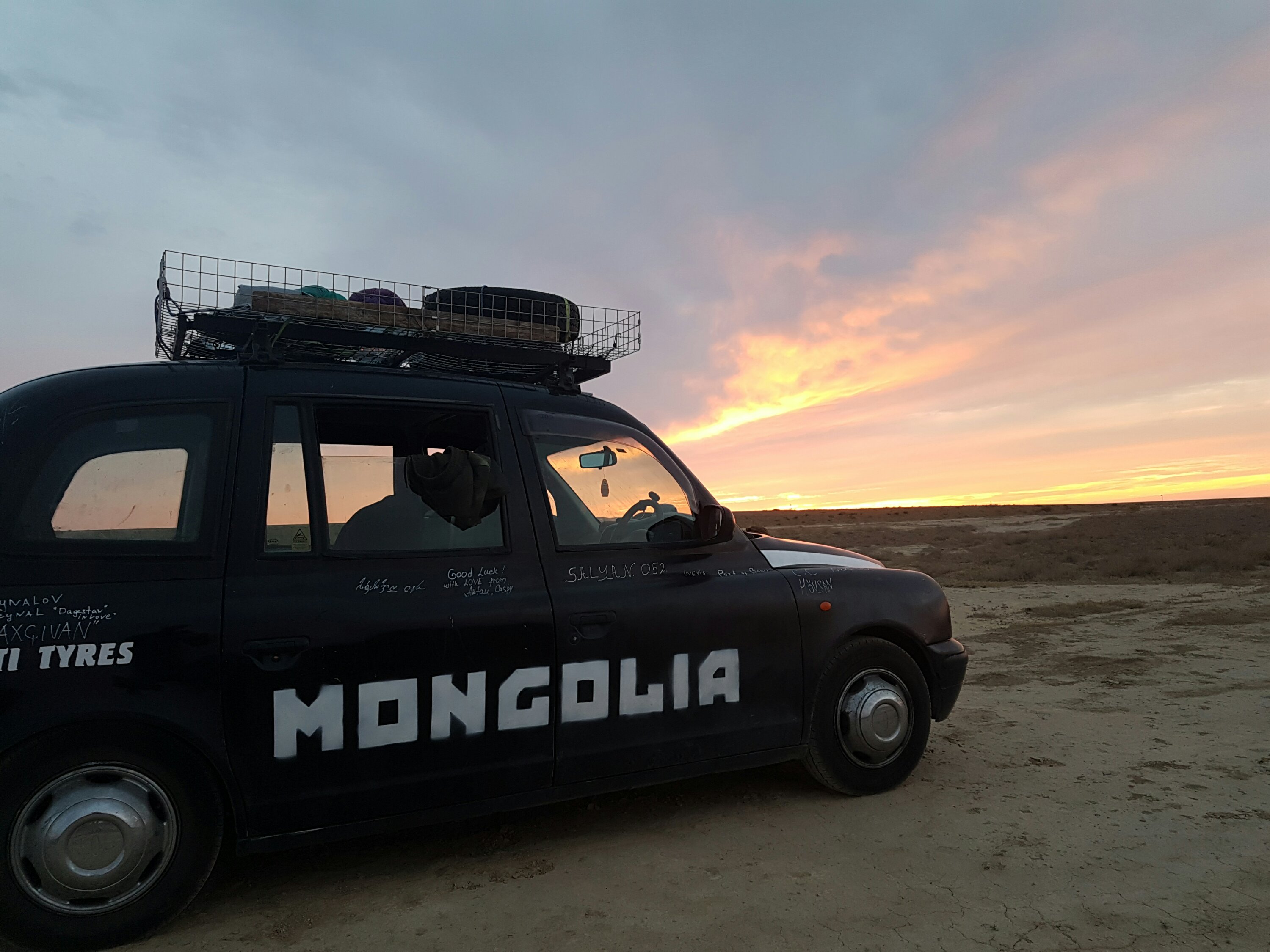 We planned an early start the next morning, so as to give ourselves a good buffer for when the roads get bad.

As it turned out, today was that day. Two of the satnavs said go one way, that it was 80km and would take about 40 minutes, and one said to take a detour of over 200km. It thought that the detour was quicker than the 80km road. Surely this was wrong, we thought? Surely 80km is always going to be quicker than 280km? When forced to navigate down said 80km shortcut, satnav 3 said it would take 7 hours. Pah, what a stupid satnav.

But then, abruptly, the road ended in a mound of rubble, and we were forced onto the dirt track beside it. What ensued was some of the most exciting and adventurous off-roading most taxis will ever see. At least initially.

After covering barely 20km in 3 hours, the tedium began to set in and the lack of progress demoralised us.

The bumping about was terrible, especially the rear seats. The taxi’s suspension is very different between front and back, so where the driver feels a light bump the passengers are flung into the ceiling.

Kilometer by kilometer, we approached the tiny village of muruk, in the middle of nowhere. Arriving, annoyingly, exactly when satnav 3 thought we would: 7 hours later.

As soon as we set up camp it all became worthwhile though. We were up on a hill, with the plains stretching out for miles and miles around us. We could see the wild horse dust clouds in the distance, there was utter silence and a stunning sunset. The pictures do it more justice. 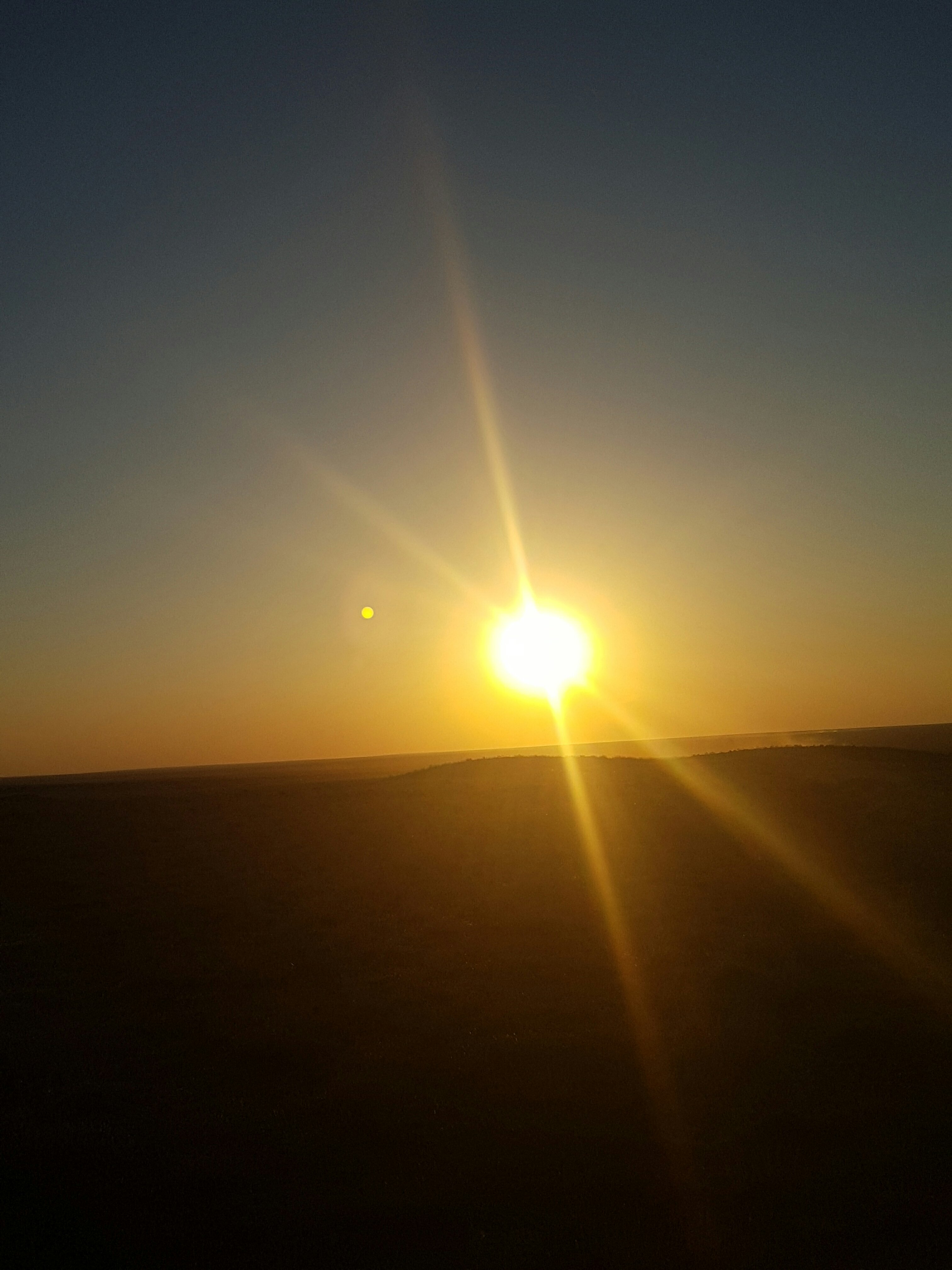 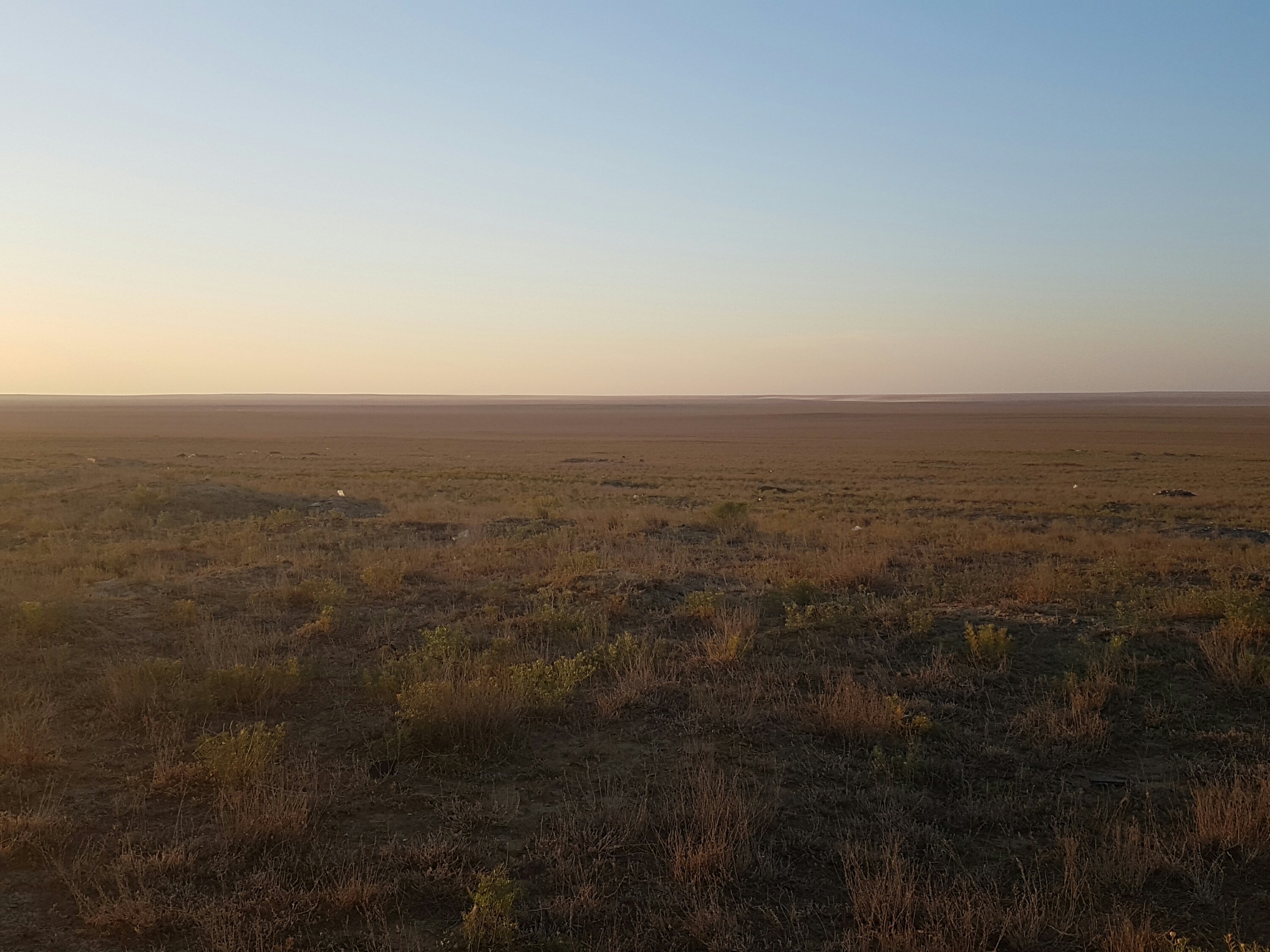 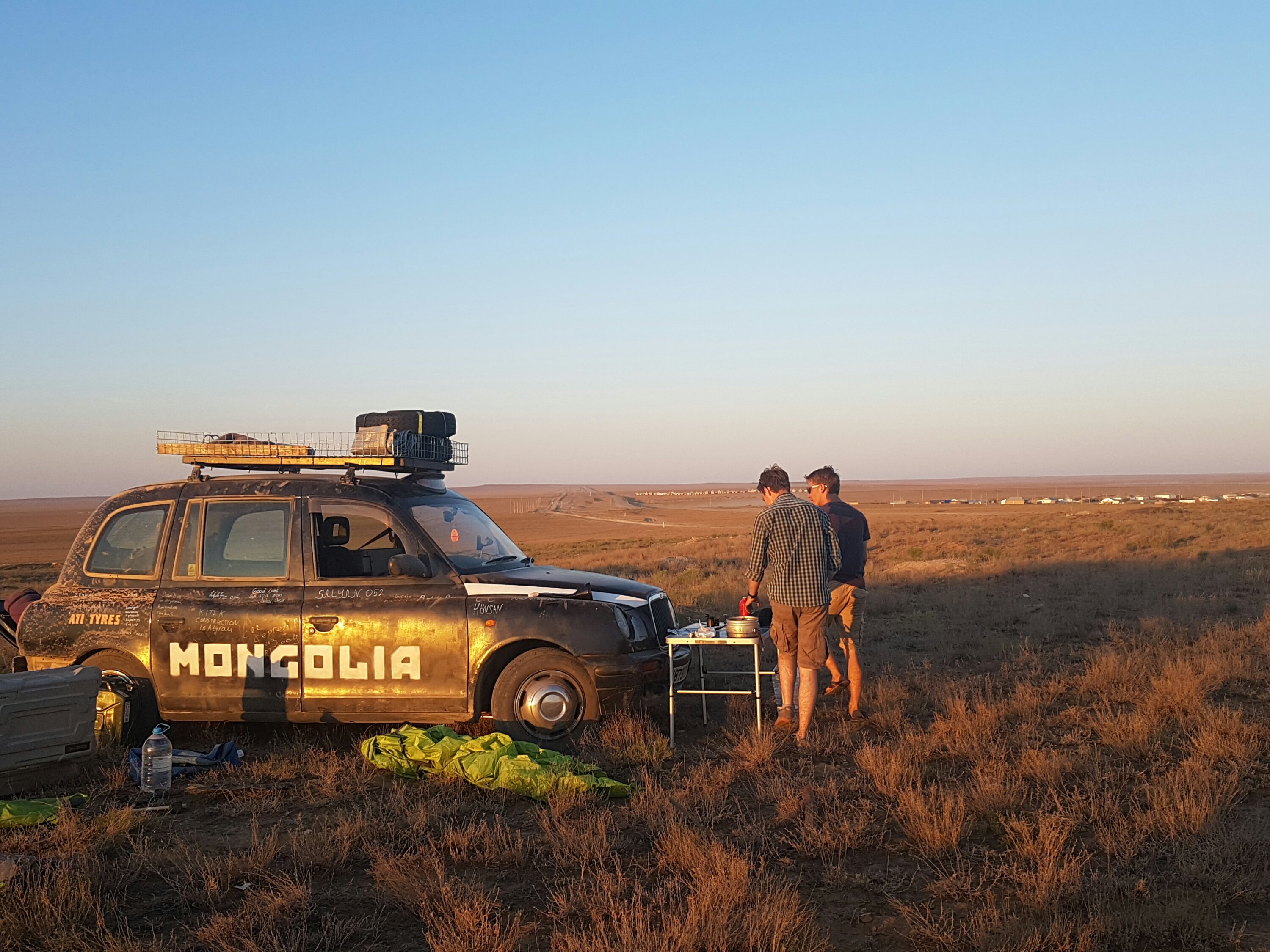 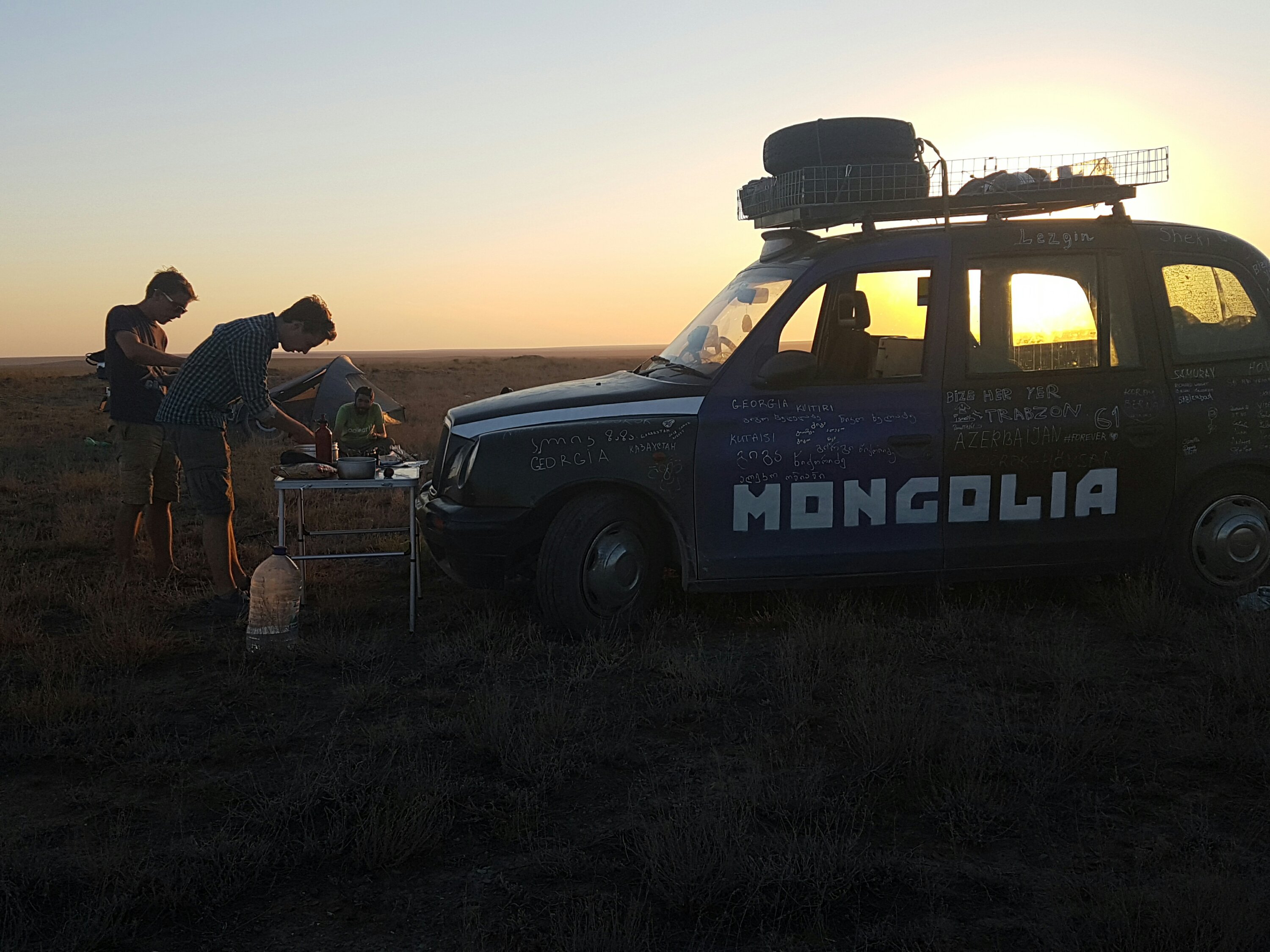 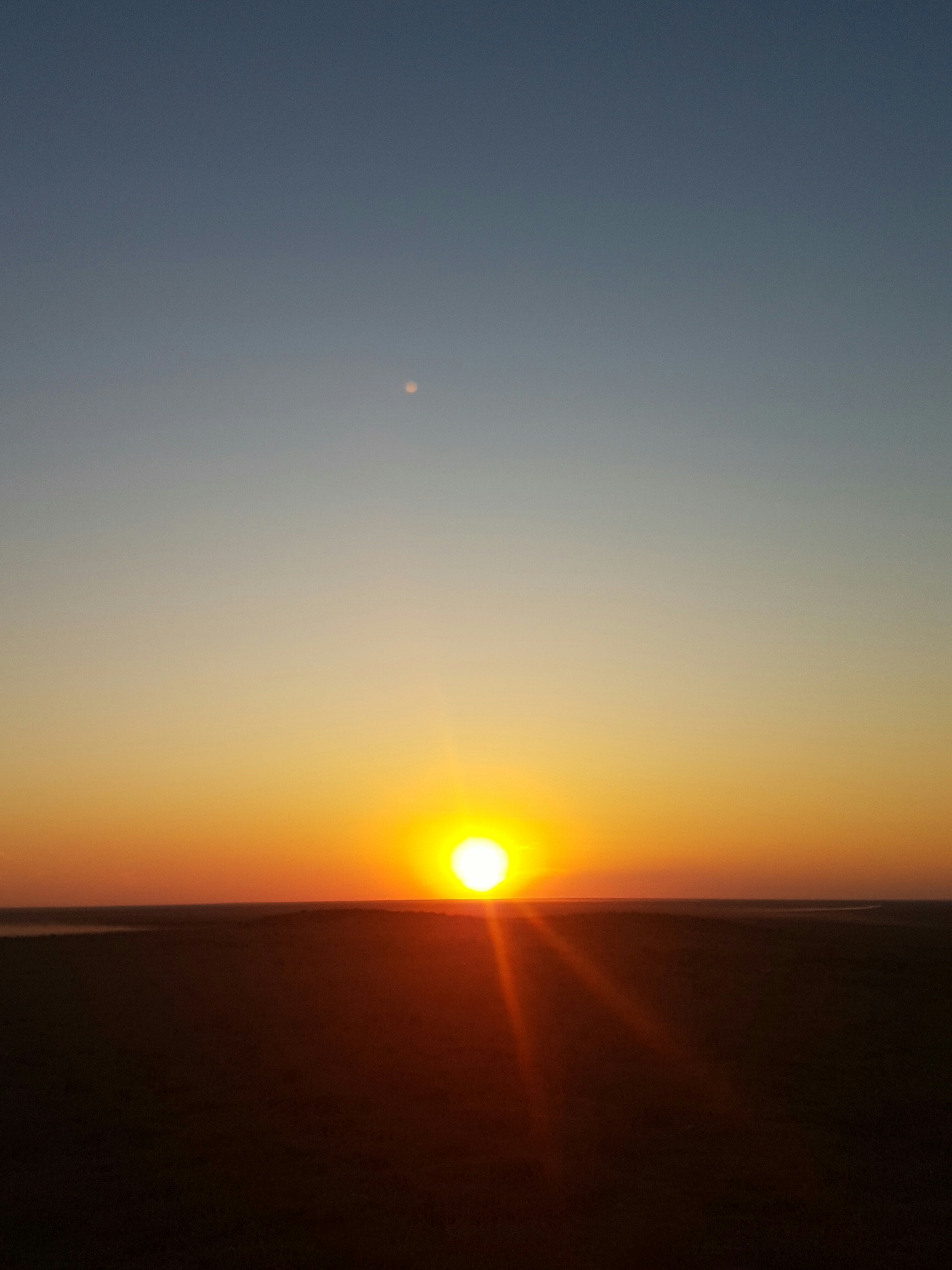 The next morning we set off bright and early. We realised here that instead of going to Almaty, we could go to Astana to get our visas. This was far more convenient and on route, so we changed the whole plan and headed down a new path, this time following satnav three, as it seemed to know about the roads.

At the restaurant/petrol station we stopped at, a friendly lorry driver began communicating with us (I wouldnt call it talking because neither party had any idea what the other was saying). Then he began flicking his neck, something we had learnt means vodka (or maybe just alcohol?). Happily, Russell and I tried some of the local produce, even with it being 9am. After much insistence one shot was enough, we departed. 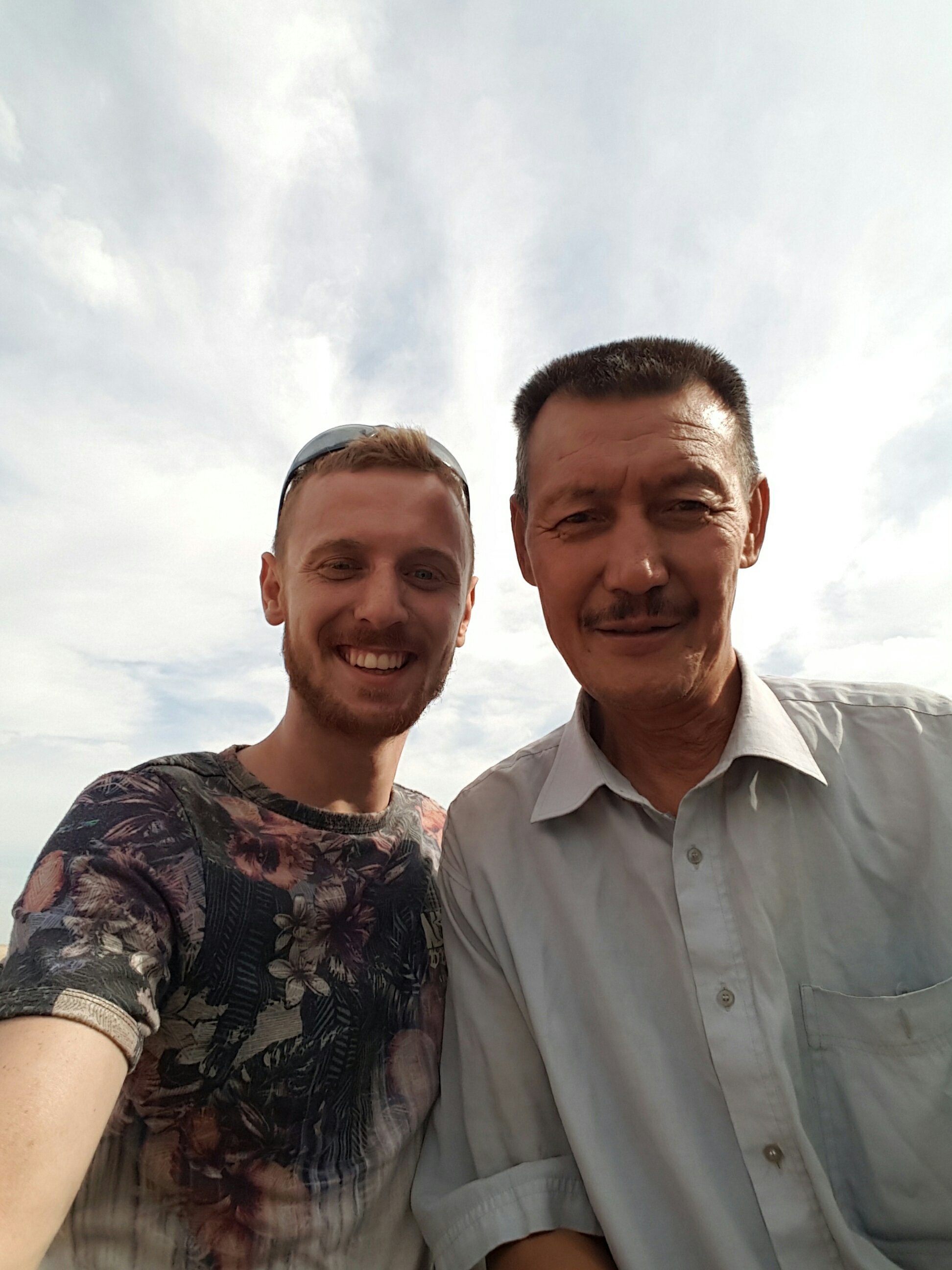 At this point, the dust was everywhere. Coating everything and seeping into our skin, there was no ignoring it and no getting rid of it. It was as much part of Tina as anything else.

We were equally as filthy as Tina, so it mattered little.

Satnav 3 now became our main source of information, we put a lot of trust in it. After some blissful tarmac and 95km/h however, it told us to turn off. Onto a tiny dirt track, which was 60km long. We paused at the start of it, assessing whether it was the best route. Satnav 3 said it was so that was the plan.

Almost instantly we regretted it, but too prideful to stop, we travelled as far as we could, about 300m down this poor excuse for a road. Then the inevitable happened.

She was stuck. Wheels spinning, nothing happening. I was actually quite happy this happened initially, it was exciting and fun. As we raced to employ the techniques a Saudi Arabian had taught us in Turkey, the increasing thoughts of ‘we are screwed’ bubbled up.

Eventually, we undug her, and reversed back towards the road from whence we had come. We planned to find the shallowest bit of side of the road so we could finish the journey back to the tarmac on the grippy shrubbery. As I was reversing, I swung the cab round. There was a glorious moment in which we though it worked, but then: 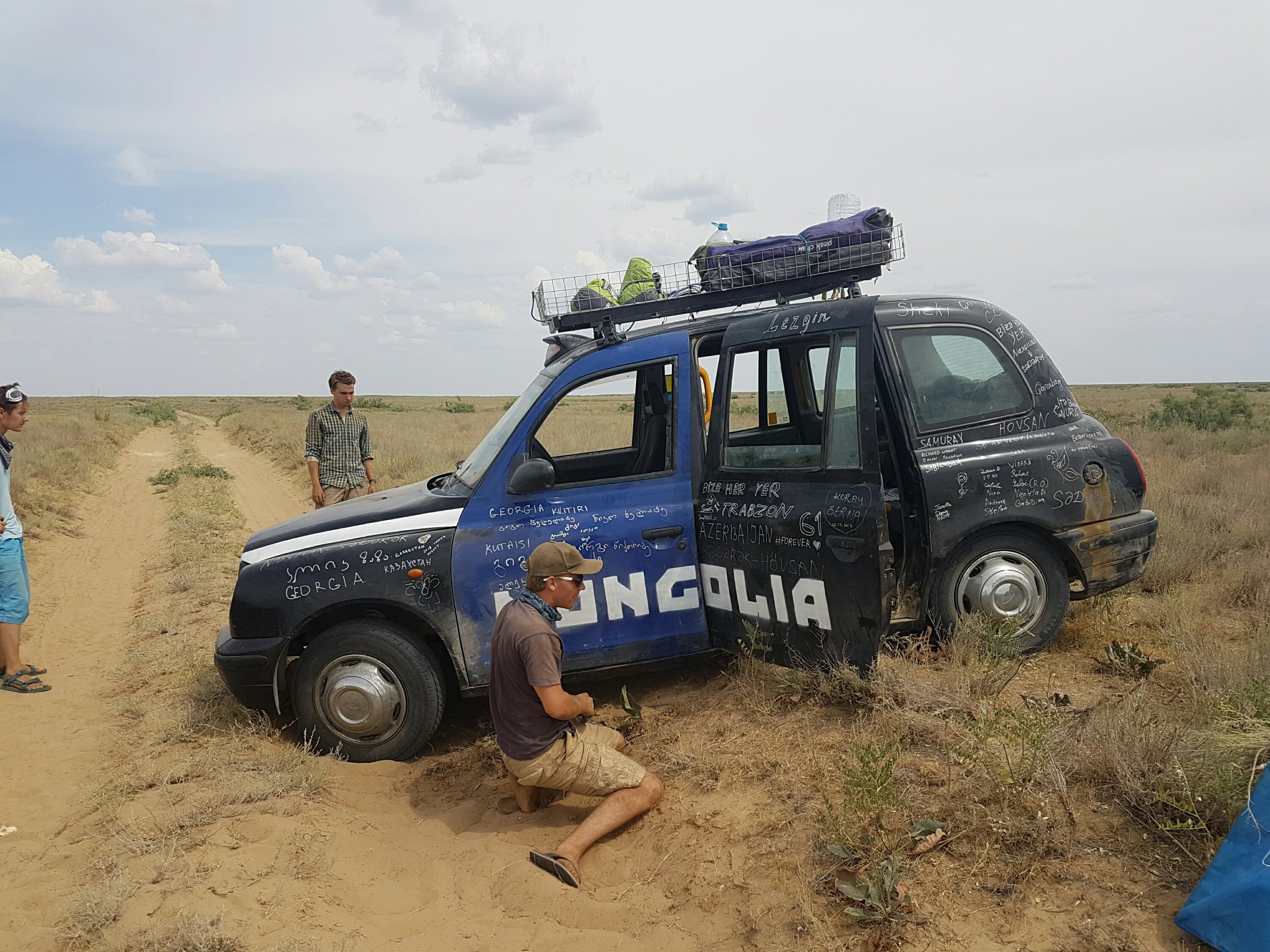 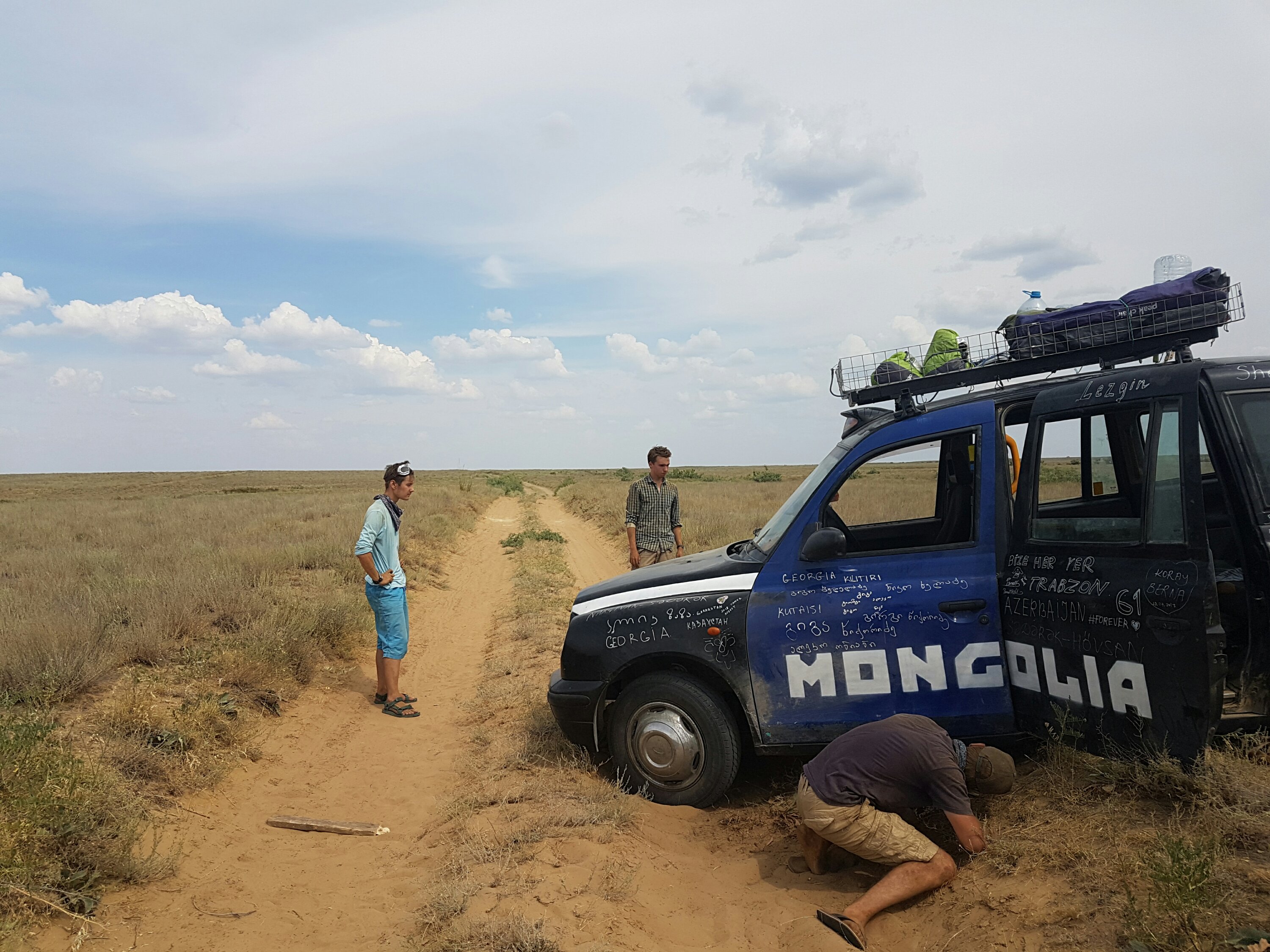 Stuck again. This time it was much worse, the weight of the rear of the car was on the sump guard, which stretches about halfway along the underside. This meant the rear wheel drive tyres gained absolutely no purchase on the ground. It was looking bad after 20 minutes, but it definitely could have been worse. We were still only about 250m away from the main road, not 30km in the middle of nowhere with no one passing. We tried the previous methods, to no avail. We would have to dig out the dirt underneath the car to put the pressure back on the wheels.

Seeing as this couldn’t be done by everyone, I went to the main road to try and get a tow. I stood in the blistering sun, swinging a tow rope about. In about 20 minutes, 2 cars had past and ignored me. Then one stopped, said he was going to get someone. Still no one came.

Eventually a family drove past, seemingly ignoring me. Then they put the brakes on hard, swung back and came to talk to me. I pointed at the tow rope, at the car (just visible from the road, luckily). The driver told me to hop in and I did, and we drove towards the car, cross country. The wife and daughter were in the back and when we arrived they instantly went for the selfies.

Meanwhile, we hooked up the tow ropes, and began. Initially nothing happened, the gentle and increasing tug had not worked. He dropped back a bit, and then pulled hard in one big yank. We were free.

The digging took a toll on our dirtiness:

A kind man then showed us a better road, that wasn’t on any of the satnavs. He even drove us there, and I enjoyed his air conditioned cabin for the best part of 5 minutes. 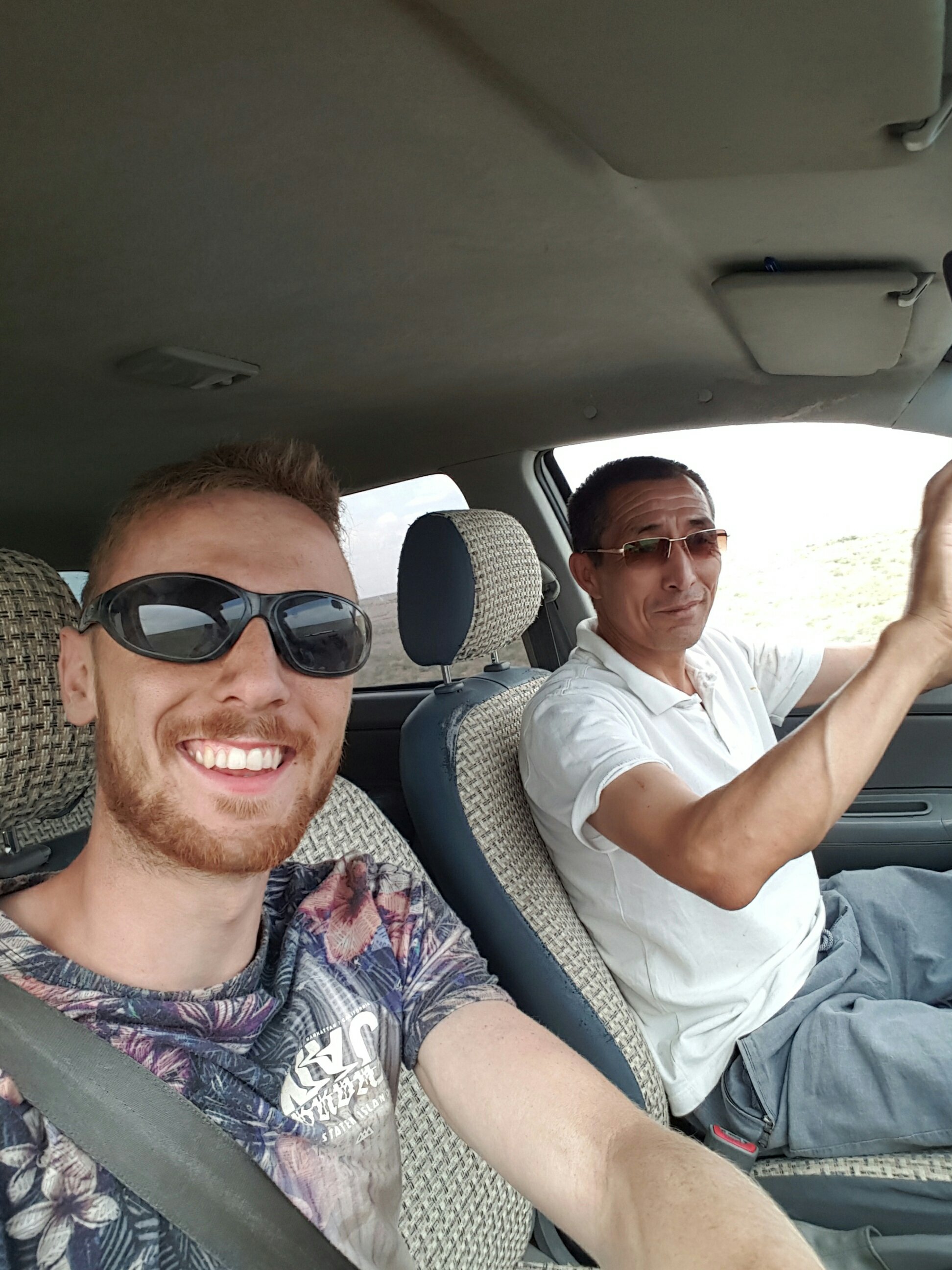 We arrived in a small town called something like Uil that night, and were lucky enough to bump into the nephew of the owner of the only hotel in town. We got a nice little room for about £2.50 each, with a kitchen. And a cute puppy, I mustn’t forget the puppy.

The remaining days were a whizz of driving and camping, trying to get to Astana on time. Aside from stopping to take selfies with certain people that flagged us down, we simply enjoyed the views and the distance we were covering. 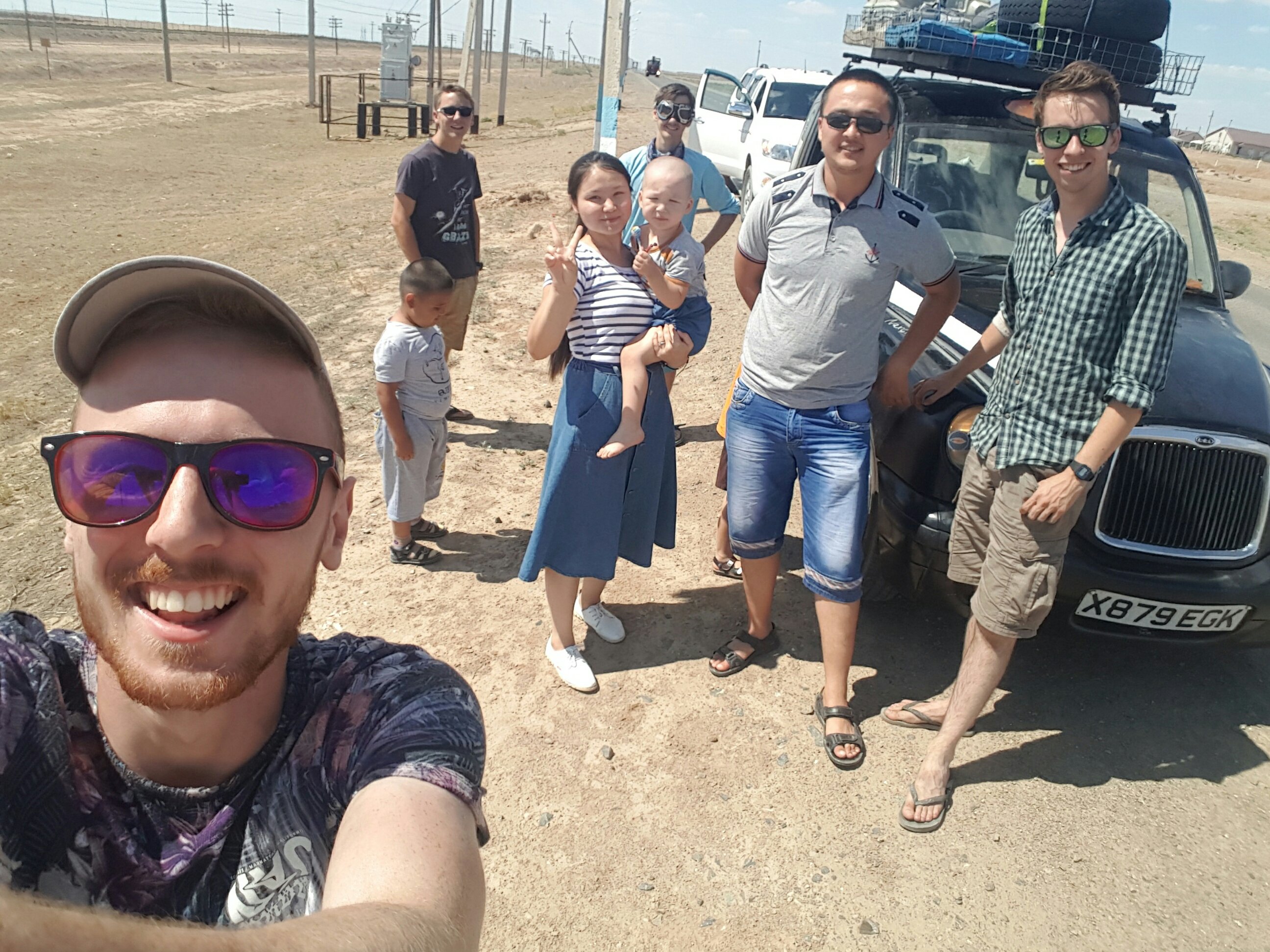 Tinas rear bumper did fall off, but that’s just a flesh wound. She’ll be okay.

We are now in the capital, Astana, hoping to get our Mongolian visas tomorrow. I’m not sure when the internet will next be good enough for an upload, but I’ll keep trying.

2 thoughts on “From Dawn ‘Til Dust”