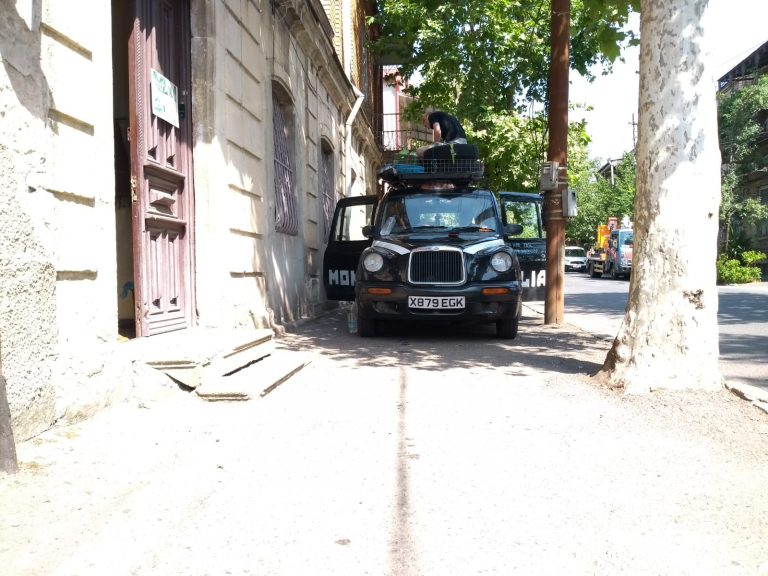 We left Batumi after sponging some McDonald’s wifi to download today’s maps. We were doing an easy 150km to a small town called Kutaisi, in central Georgia. The roads are better than expected here, but the heat is crazy. Our method of opening the windows for the breeze almost doesn’t work anymore, because the air is just so warm and dry.

The one thing that does keep us on our toes though, is the abundance of road cows. They seem to think they have priority here, and are often spotted trotting along in front of fast moving traffic. 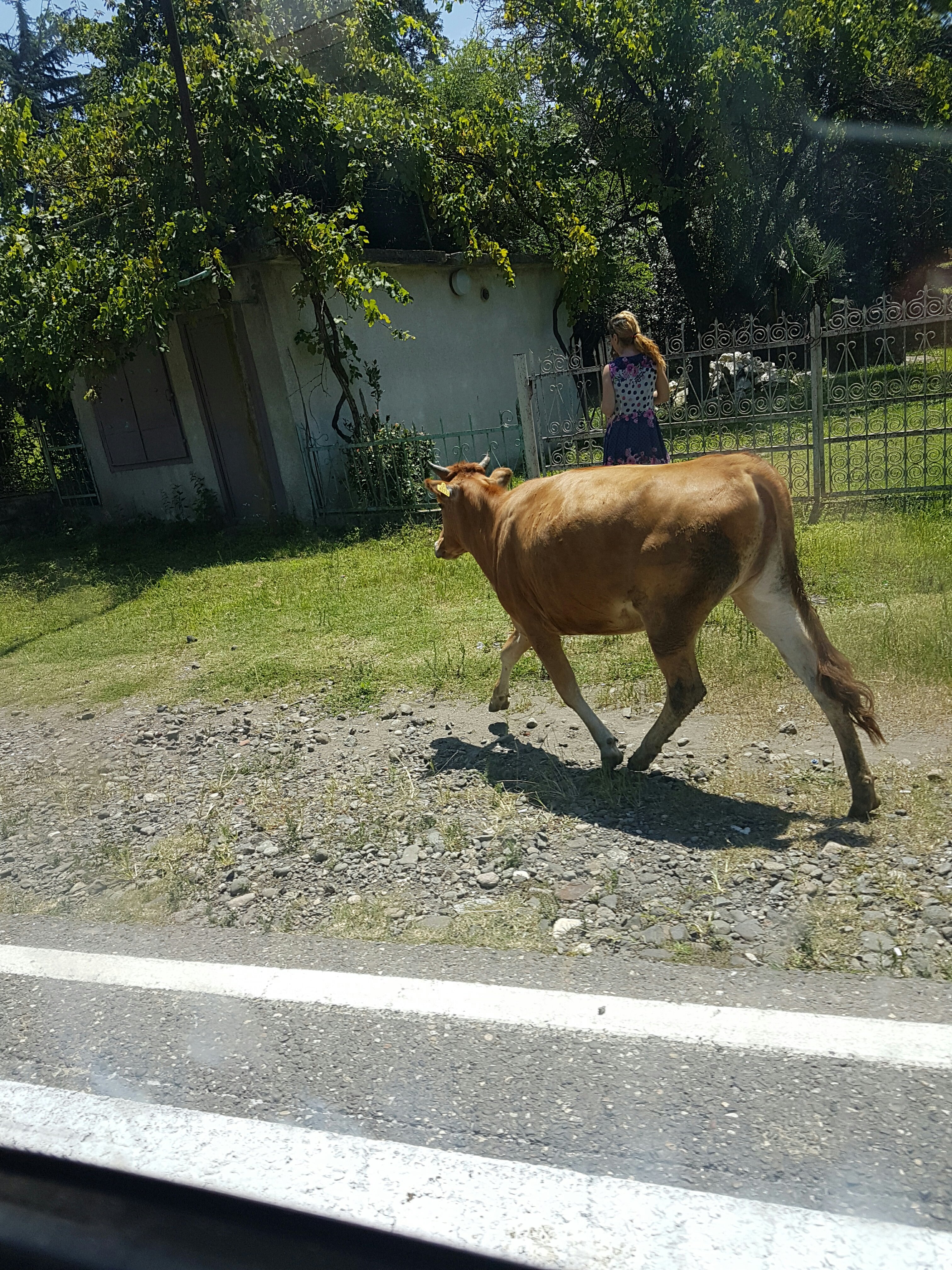 When we arrived in Kutaisi, we realised that even though it looked big on the map, it was far from it. There was a small square in the centre with some bars and that was pretty much it. After a day in the 35° heat, we were happy to accept this though and went straight to get some cold beers.

We had met some English chaps in the hostel, Ned and Ben, and after some drinks and liars dice (in which Harry thrashed everyone) we went to get some food. Ned and Ben suggested a place to get Khinkali (a Georgian kind of dumpling) which were about 20p each. The pints there were also only 60p, so that was an easy sell. 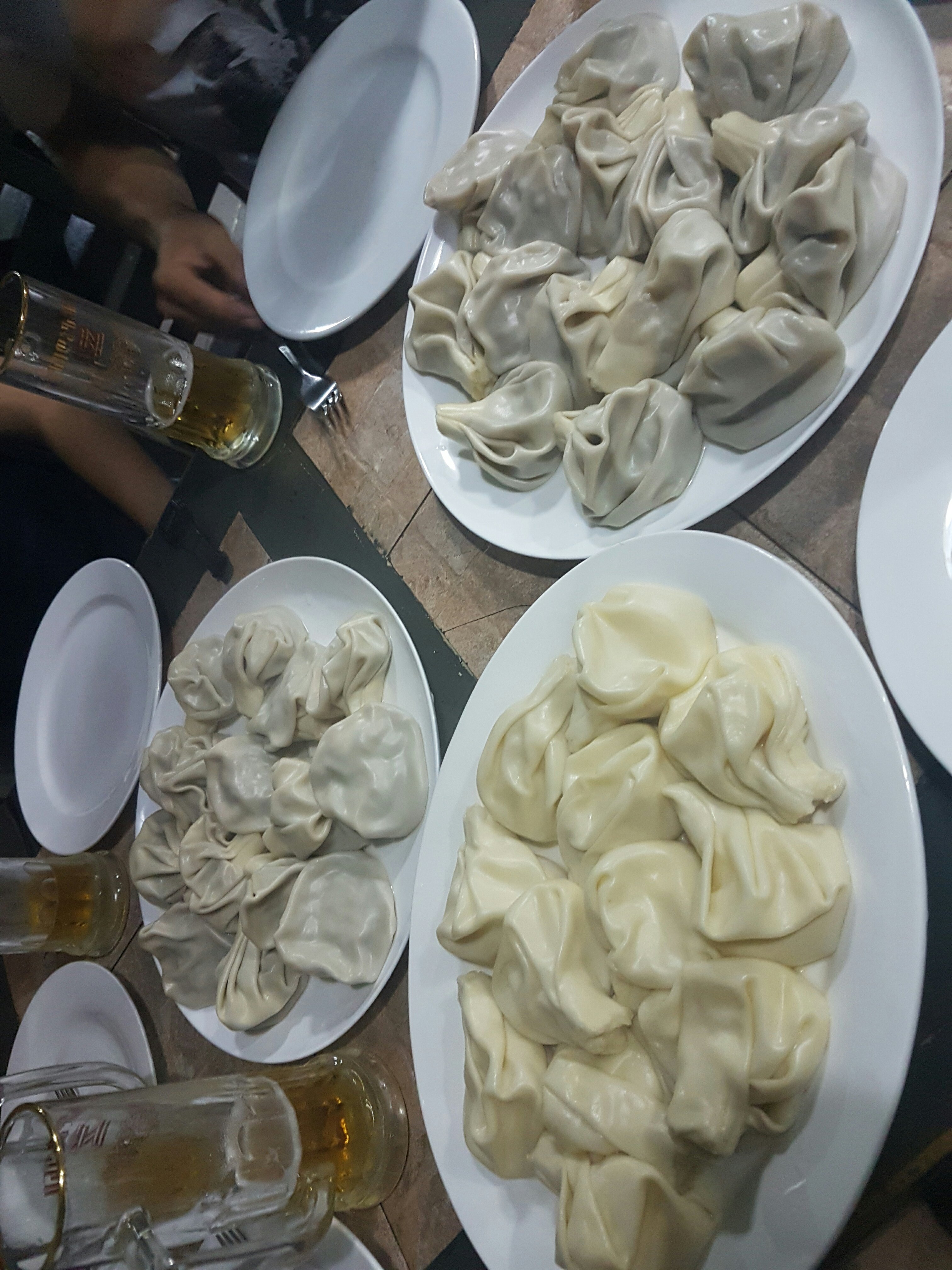 The 6 of us enjoyed these little packages of goodness for a while before asking for the bill. It came to a whopping £11 for the 6 of us, total. Gotta love Georgia.

We then went off in an attempt to find another good bar, but ended in a bit of a hole that played the music too loud. Here two couch surfers, Saaquib and Esther met us and we all got chatting (only just managing to hear each other over the basey tunes). After one last stop, it wound down and we all headed back to our respective accomodations.

We woke up and the hostel owner informed us that a georgian man who had lived in Manchester had popped through, seen the car and been so surprised he left his number. Before we left for Tbilisi and lost wifi, I quickly popped him a message saying hi and asking if he was about, to which he said he was out of town but would be back later.

At this point, we had begun moving the car out of the parking space between a tree and a wall that we had wedged it in last night. 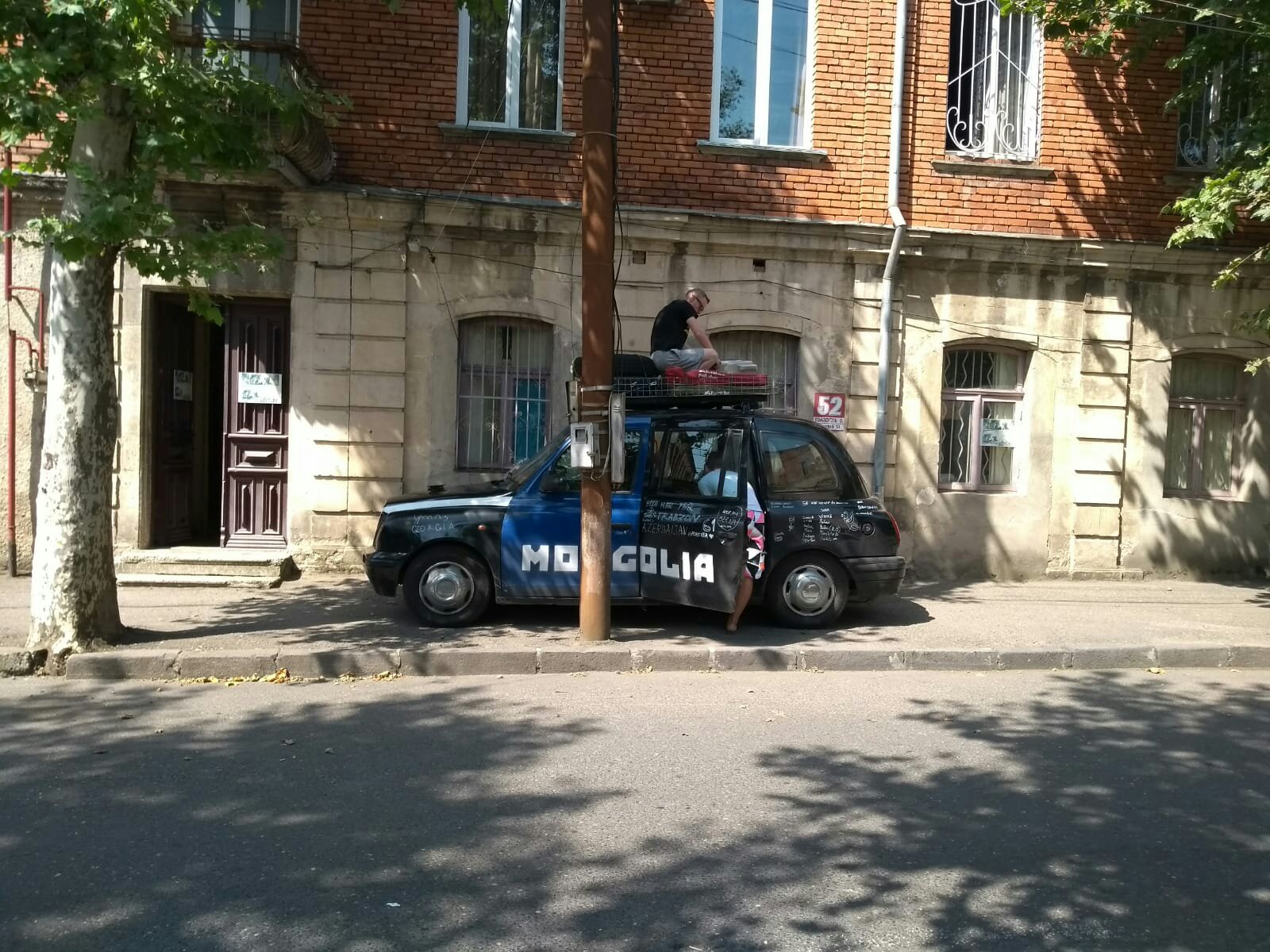 As we did this, the turning of the steering wheel made a horrible creaking/cracking noise. We tested it once or twice more then stopped. Something was definitely wrong, albeit the car was working.

We had different opinions on what to do. Russell has very much been of the opinion: “if its not broken yet why bother paying to fix it”. I can understand this point of view but I definitely didn’t agree in this case, the steering just sounded so bad. After some debating and chatting, we decided we should take it to a mechanic, lest it get worse and stop Tina running all together.

I quickly popped George, the Georgian-Mancunian, a message that our steering was buggered. He rang. He said he would come down and bring his brother, who was a mechanic, to have a look at the car. This was already extremely kind as otherwise we would probably have to consult a street mechanic who would see our tourist nature in a flash and nail us for all the money we could muster.

George arrived with his brother, and they instantly began helping. Diagnosis: Hydraulic pump was bust, so the steering fluid wasn’t being pumped where it should be. On top of that, the high pressure pipe between the pump and he steering shaft was cracked and leaking. The combination meant there was no steering fluid where there should be fluid, even though the reservoir was full.

George said it would be something he would be able to look at better in his shop, so we followed him across town.

There was a moment of nerves, as we had heard of people in Bulgaria being told that the car was broken, then they’d take it to the garage where it would then be stripped and they would charge you to put it back together. But my opinion on this matter is that you can tell. You can tell when someone is a genuine, good human being. And when someone has a glint of potential profit in their eye, it shows. This may be naïve but it hasn’t been wrong on this trip so far.

In this case, everything about George told me he was the former. A good guy trying to help 4 plucky, lost Brits make their dream of reaching Mongolia come true.

We arrived at his yard where his brother and friends had a giggle at the car before getting to work. 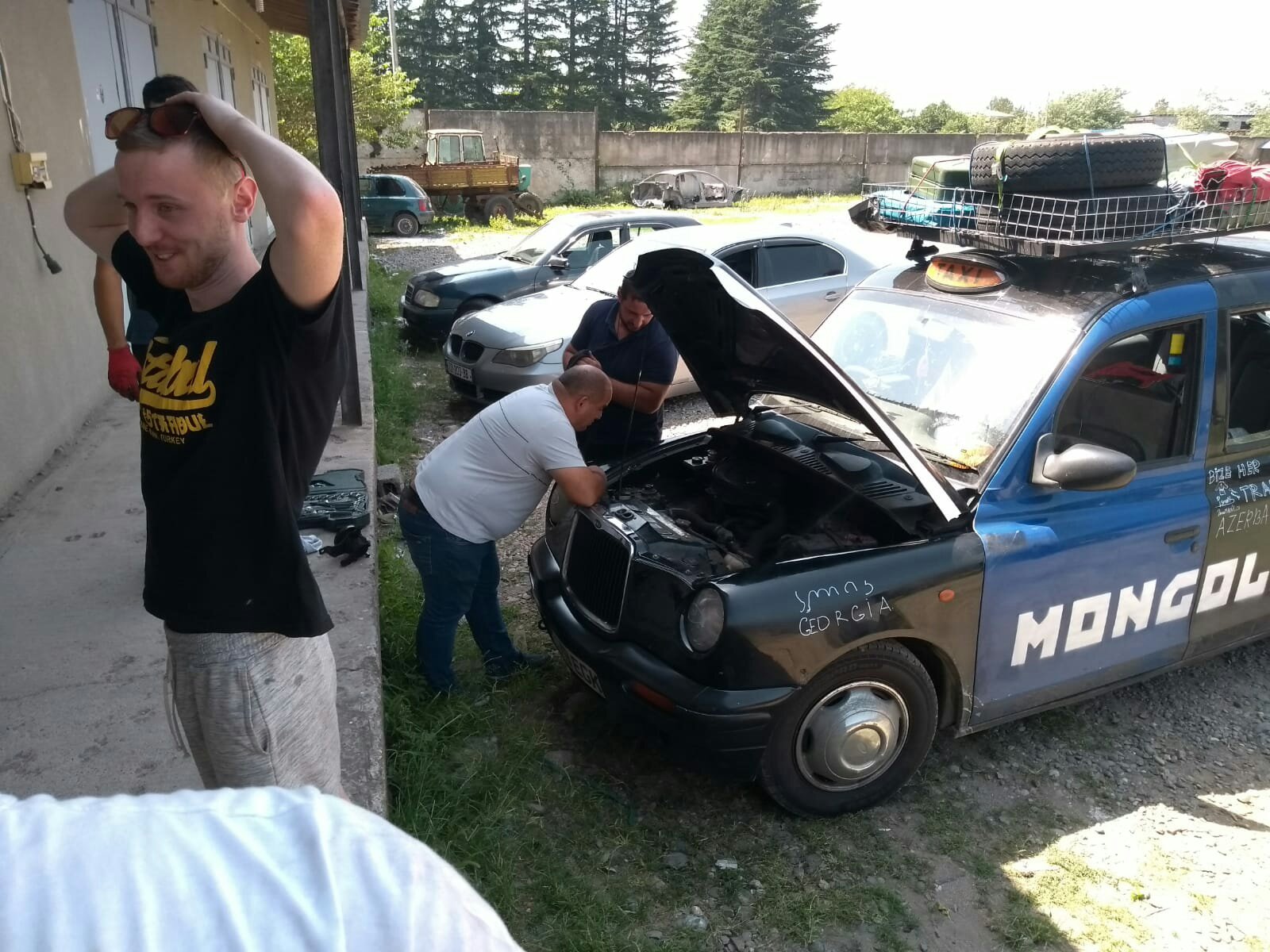 While this was happening, he ordered us Georgian cheesecake (Khachapuri, very different from English, more savoury) and some ice cold coke.

The cheesecake was delicious and the coke to wash it down was equally as welcome. The guys looking into the pump had found a replacement that was roughly the right size, albeit with a few bolt holes in the wrong places and some excess brackets. After angle grinding this down they manage to correctly fit it, and the car was working again.

This process had understandably taken some time though, and the heat was unbearable. The four of us were stood in the shade while the men worked tirelessly in the Georgian sun, where it was probably around 35°, if not more.

When it came to the end, after we had tested it and everything was working, they even gave us extra steering fluid. I asked George what do we owe, to which he said nothing. We were in shock.

4 guys time, for 4 hours, parts, tools, food, drink, fluid, driving to collect us. I love that incredible people like that still exist, and I would have happily driven across a large chunk of the world just to meet him and experience his hospitality, which is like no other. 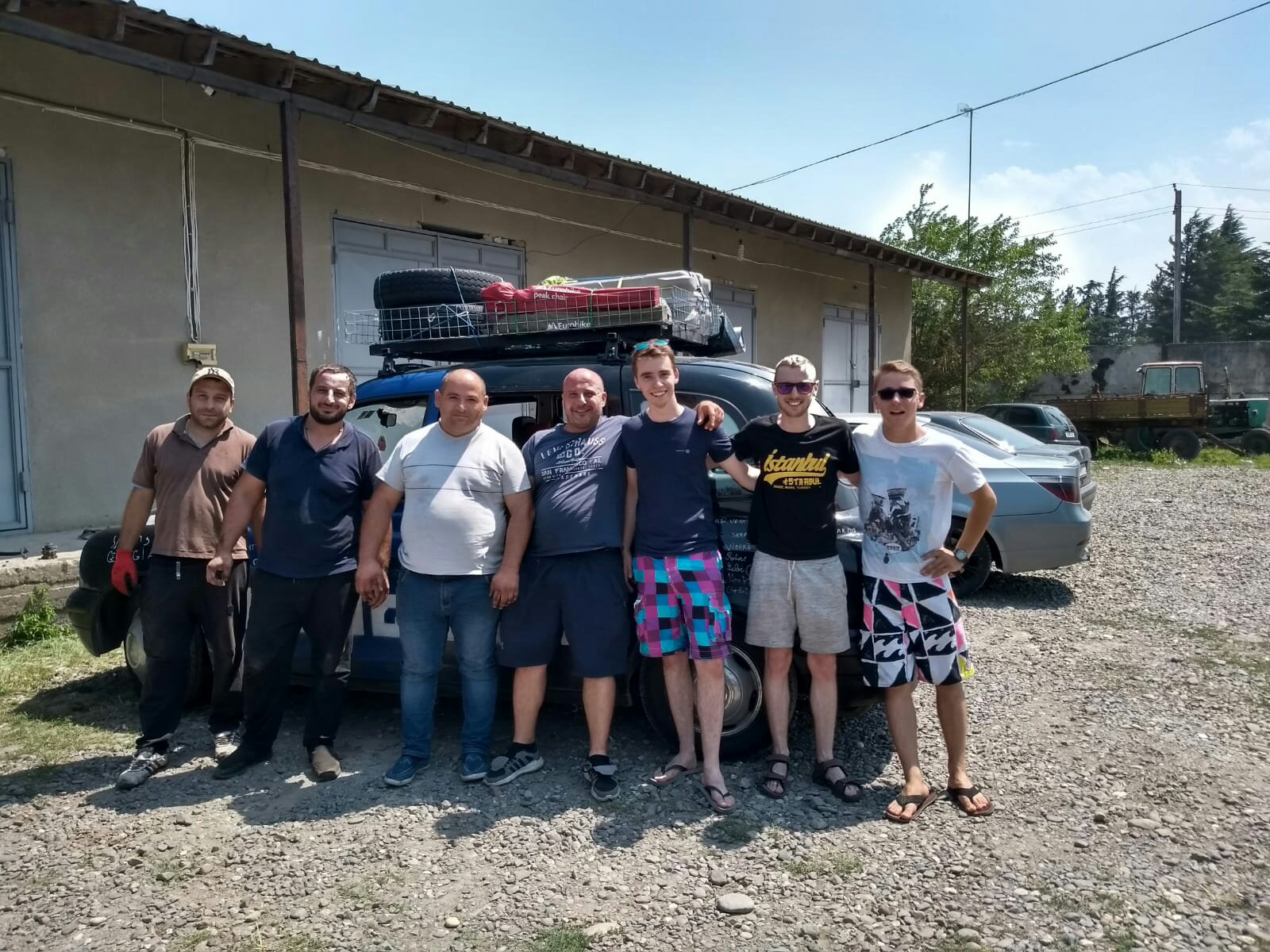 So a massive thank you to George and his crew, who I would love to thank individually by name however I didn’t catch them all.

Our beloved taxi continues, running on the kindness of strangers and the amazing people she has enabled us to meet.

1 thought on “The Greatest People”