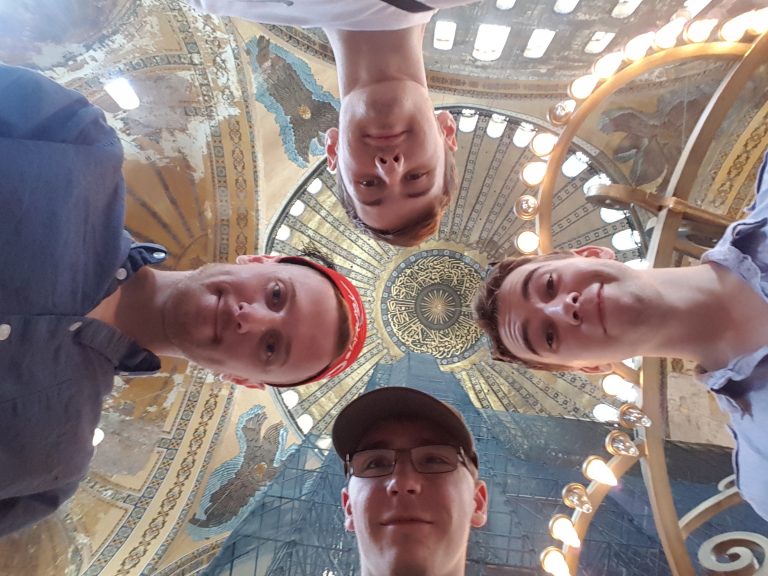 We woke up to a cockerel yet again this morning. I almost feel like one has decided to become a stow-away in the taxi, intent on waking us every day. If it has, there’s only so long before it becomes dinner.

Today’s mission was Istanbul, capital of Turkey. We hadnt heard much about it, but from the little we had heard the town was epic and the driving was horrific. This was going to be our first proper stop to actually see something, and between that and the reduced driving time we were all very excited. This was helped along by our first view of the Mediterranean sea, because who doesn’t love a good sea view. 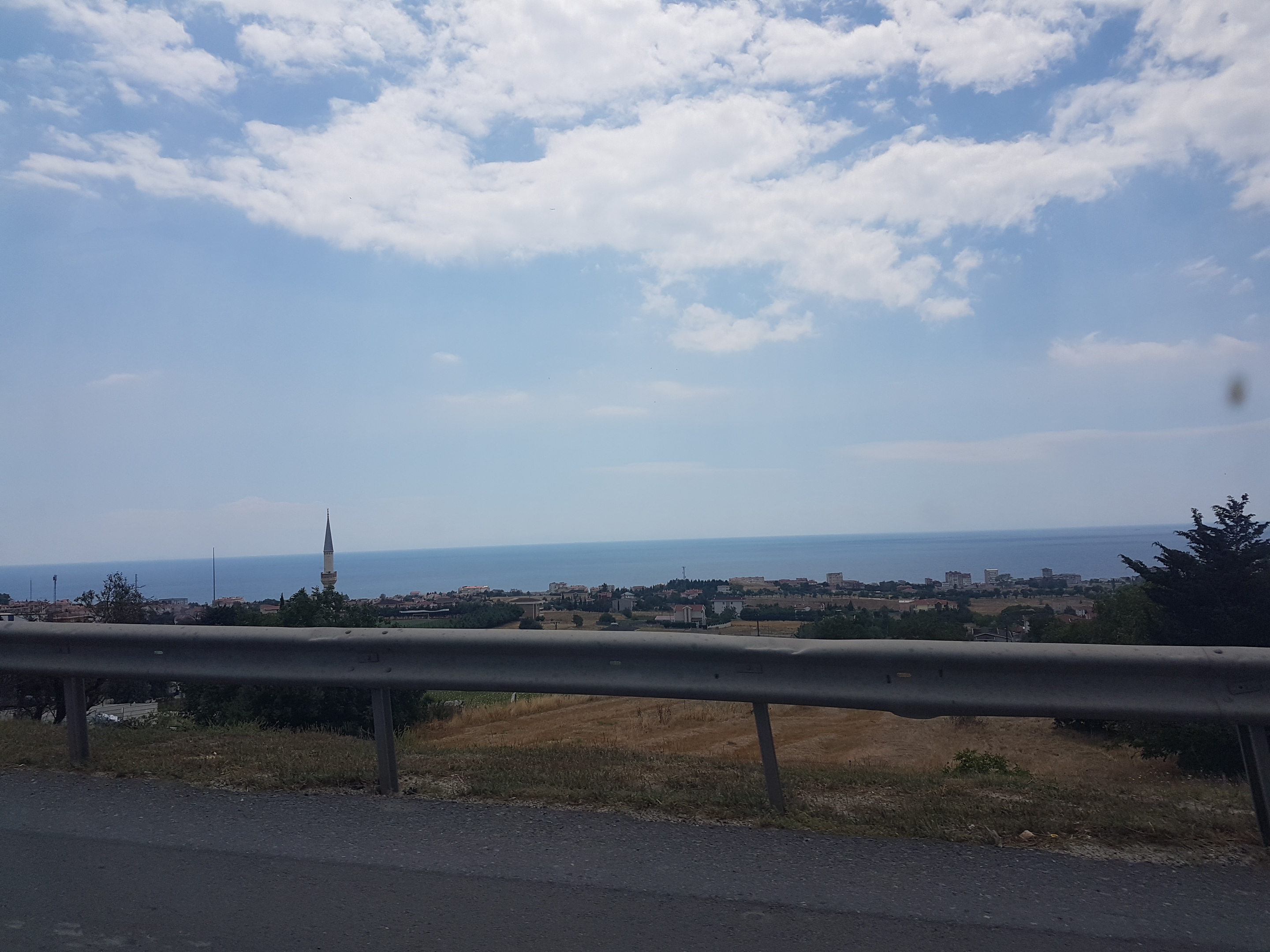 Eventually istanbul came into our sightlines, and wow. It was vast: (Not my image, too intent on driving) 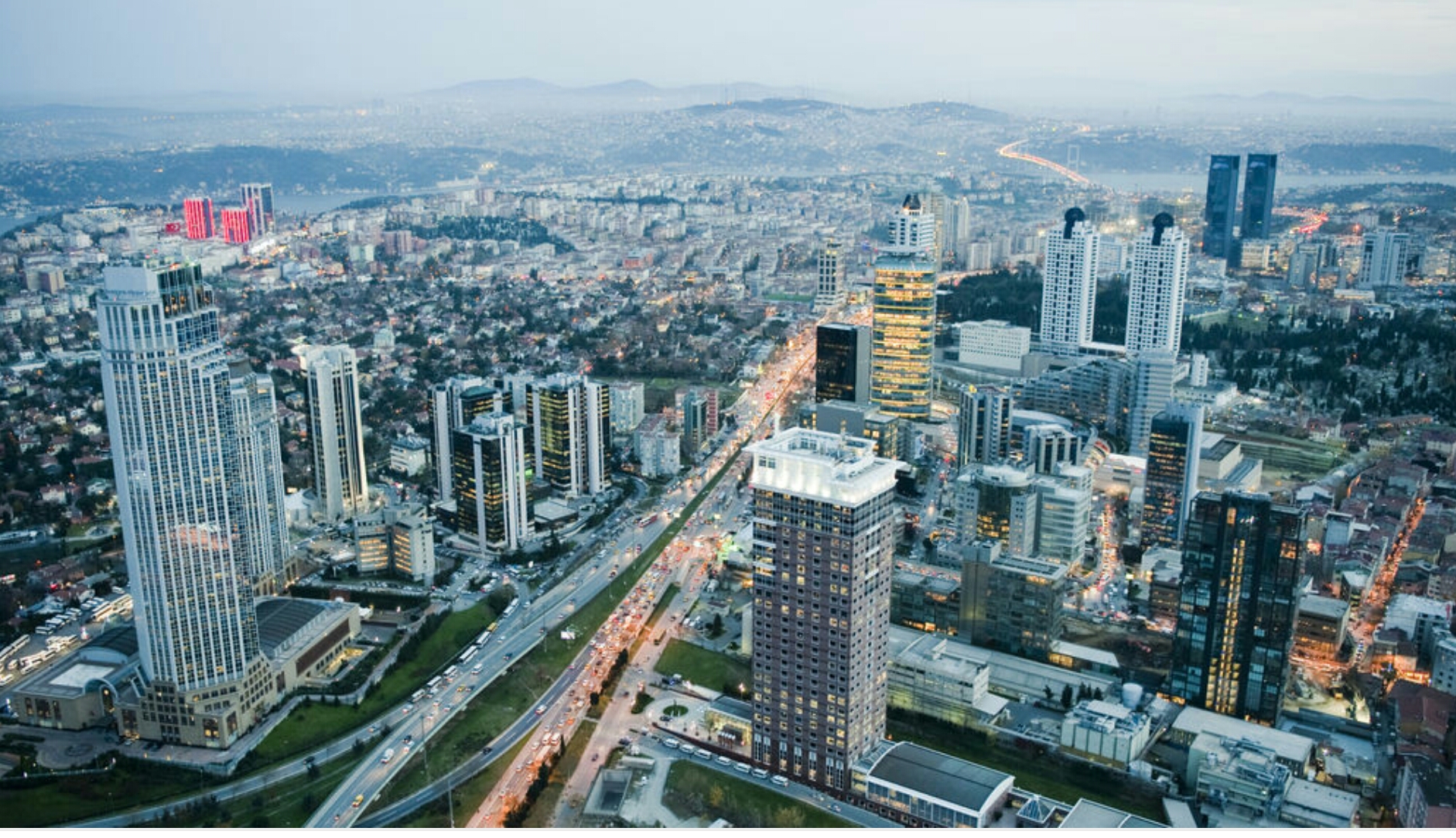 It wasn’t anything like what I had expected. It felt like the government went trigger happy on building skyscrapers as there are literally hundreds of them.

But before I could enjoy the view, there would be the screech of a horn and me twitching about to try and figure out who was going to hit me. I would then realise there were three lanes merging into one while the speed limit had changed while a bus had decided to release it’s passengers in the middle of the road while a man selling water bottles dashed between the lanes. It was chaos.

The sweating began and it didn’t stop. Our plan was to park Tina on the outskirts and get the metro into town, to minimise city driving. This worked to an extent, but we still had to deal with things like this, where the driver had left his lorry in the middle of the road. The hazard lights were on though so it was all fine, right? 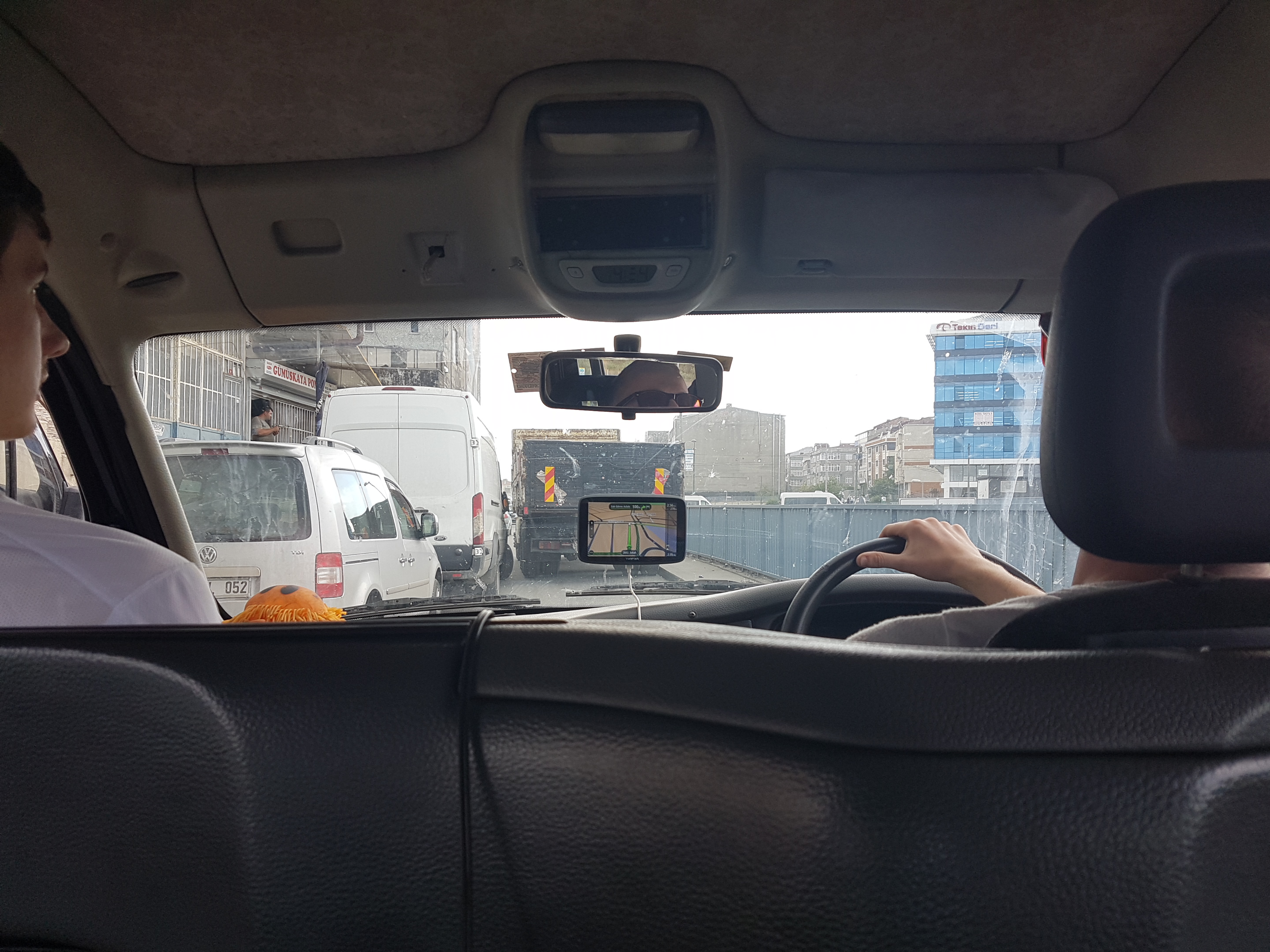 Eventually we parked up, payed a slightly dodgy looking geezer 15 lira (about £3) to look after the car overnight. He had a good smile and was very friendly so it must have been safe.

It probably took us about 10 minutes to figure out how the ticket machine worked at the metro stop, and no one spoke English. 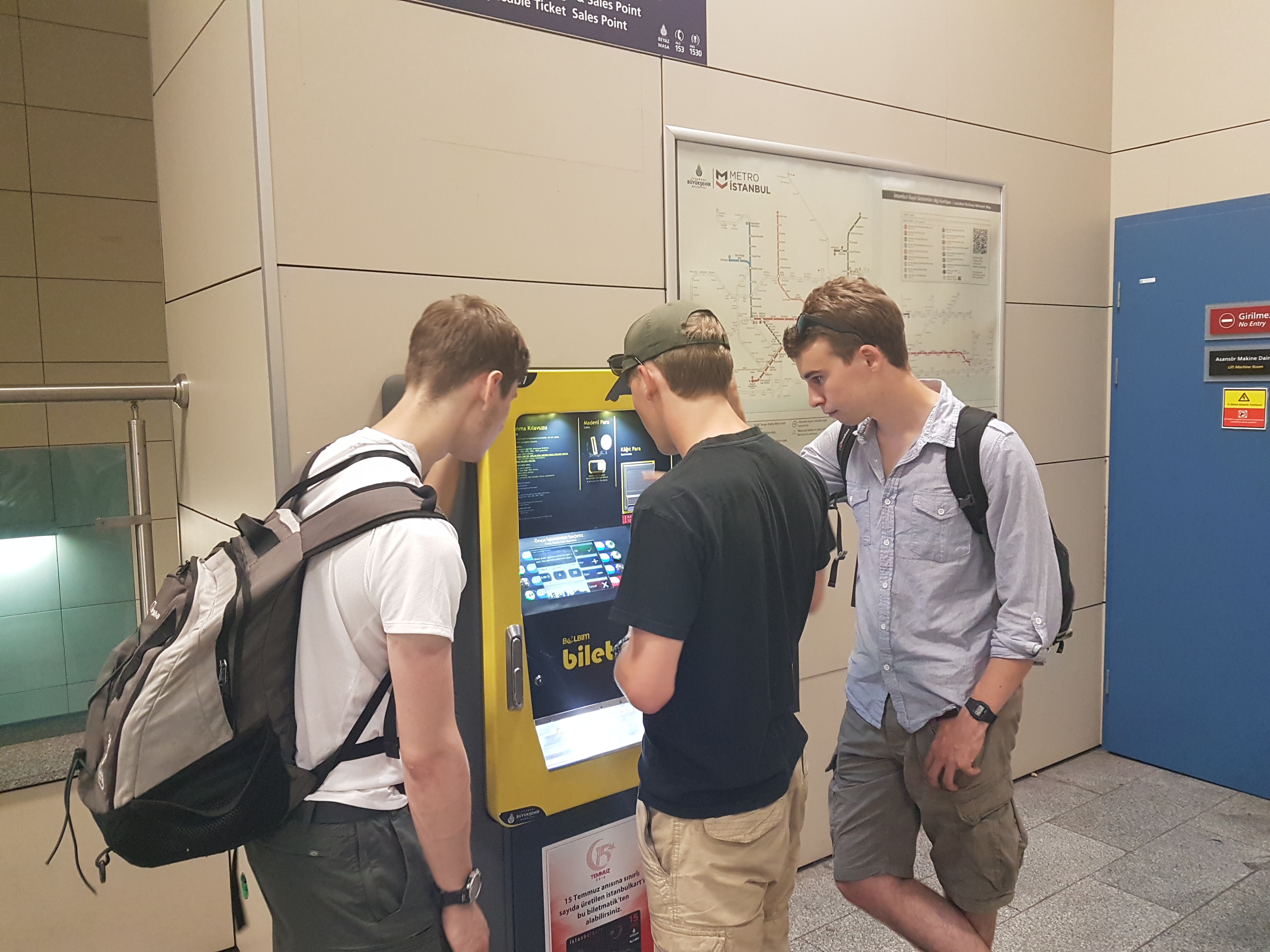 When we did figure it out, we got the tube to the centre of town and then booked in at the avrasya hostel for €10.  It was bang in the centre, right next to Hagia Sophia and all the bars.

We enjoyed a gorgeous meal and Harry made a friend in Mario, the restaurant cat. 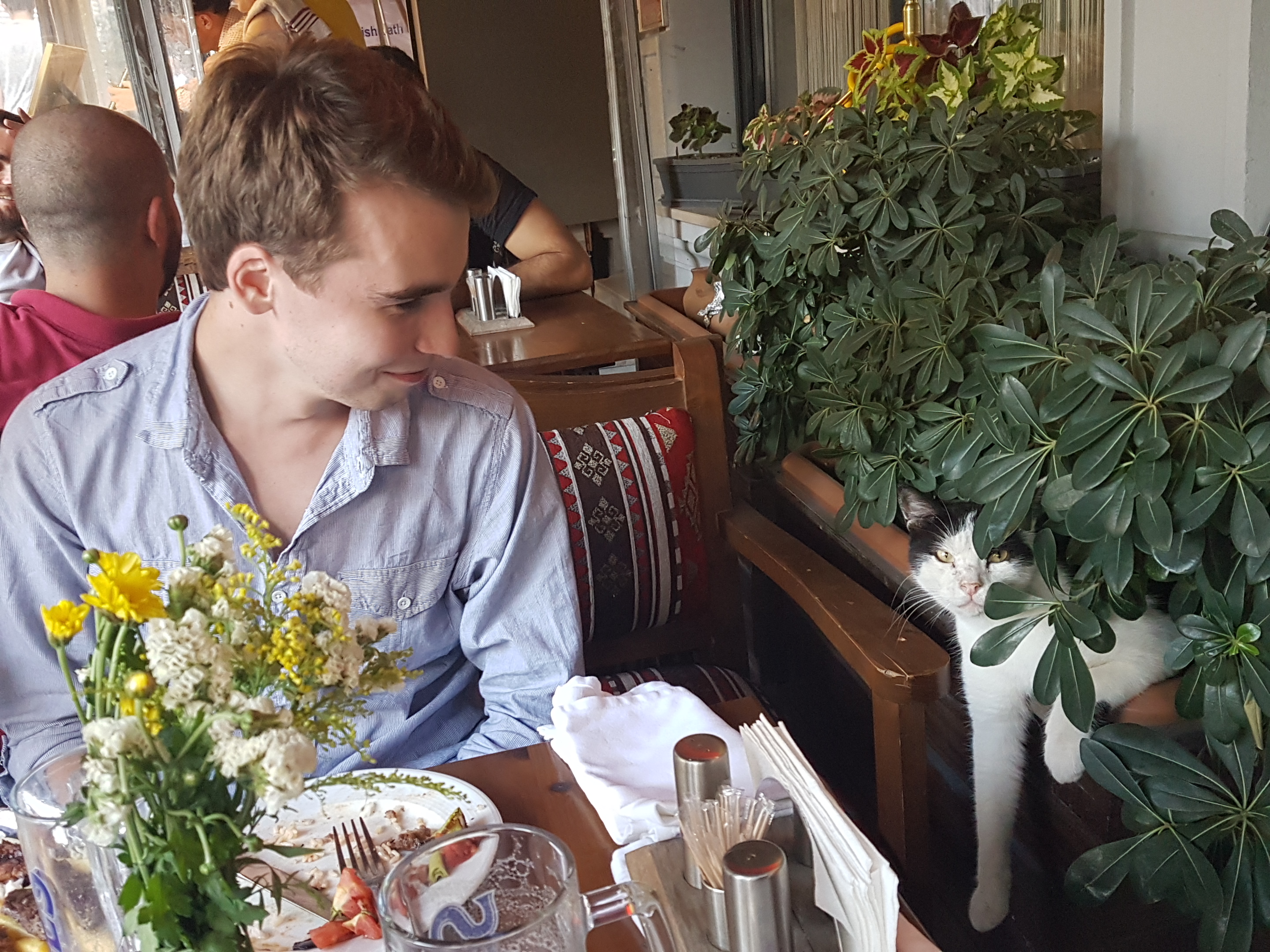 Afterwards we went for a tour-de-bars, passing through a particularly high up bar with a beautiful view of the skyline. 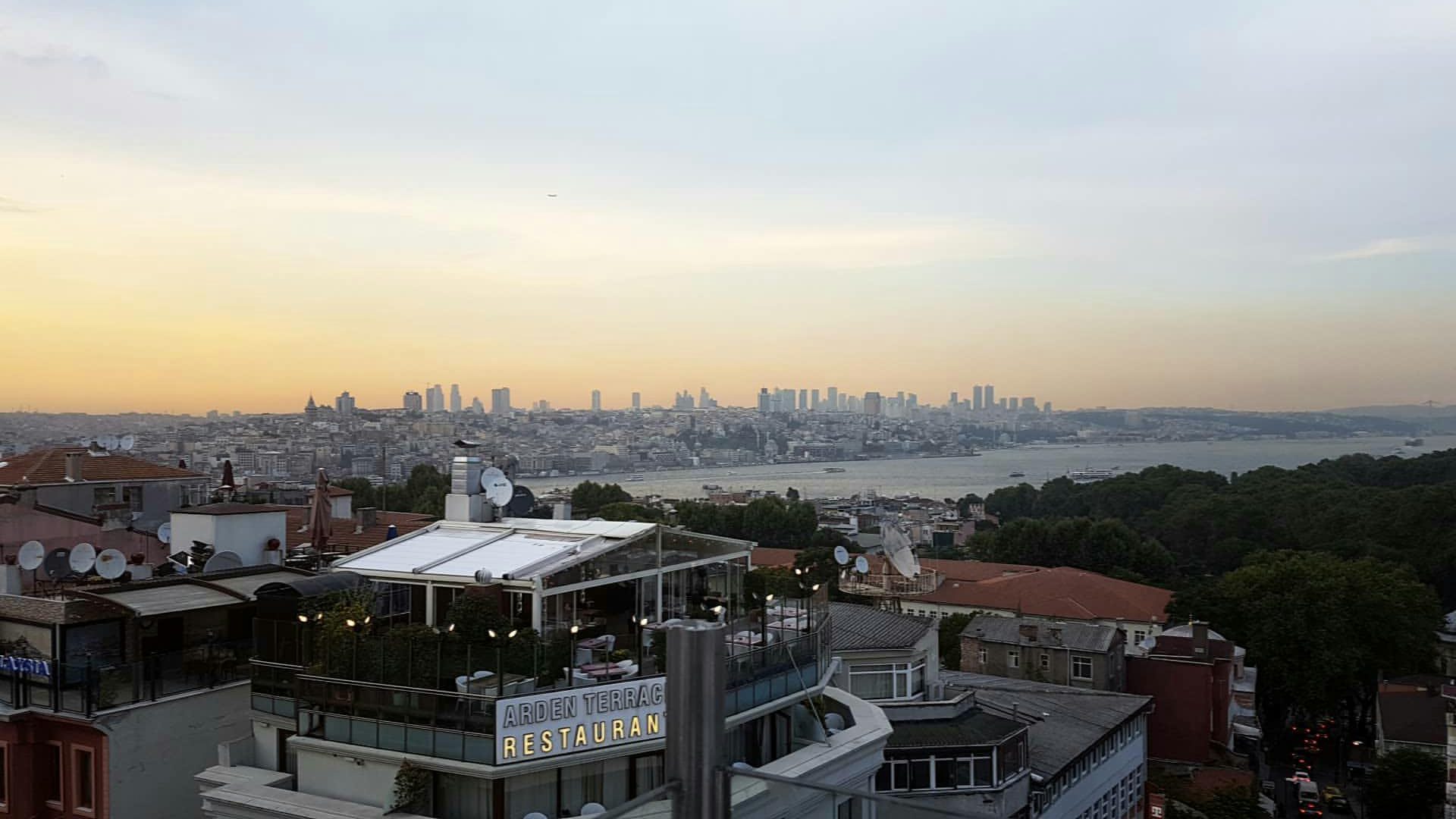 We ended the evening with a shisha, yet more beer and good company. We made a lot of friends, all of which wished us the best of luck on our endeavour and that they believed we could make it. 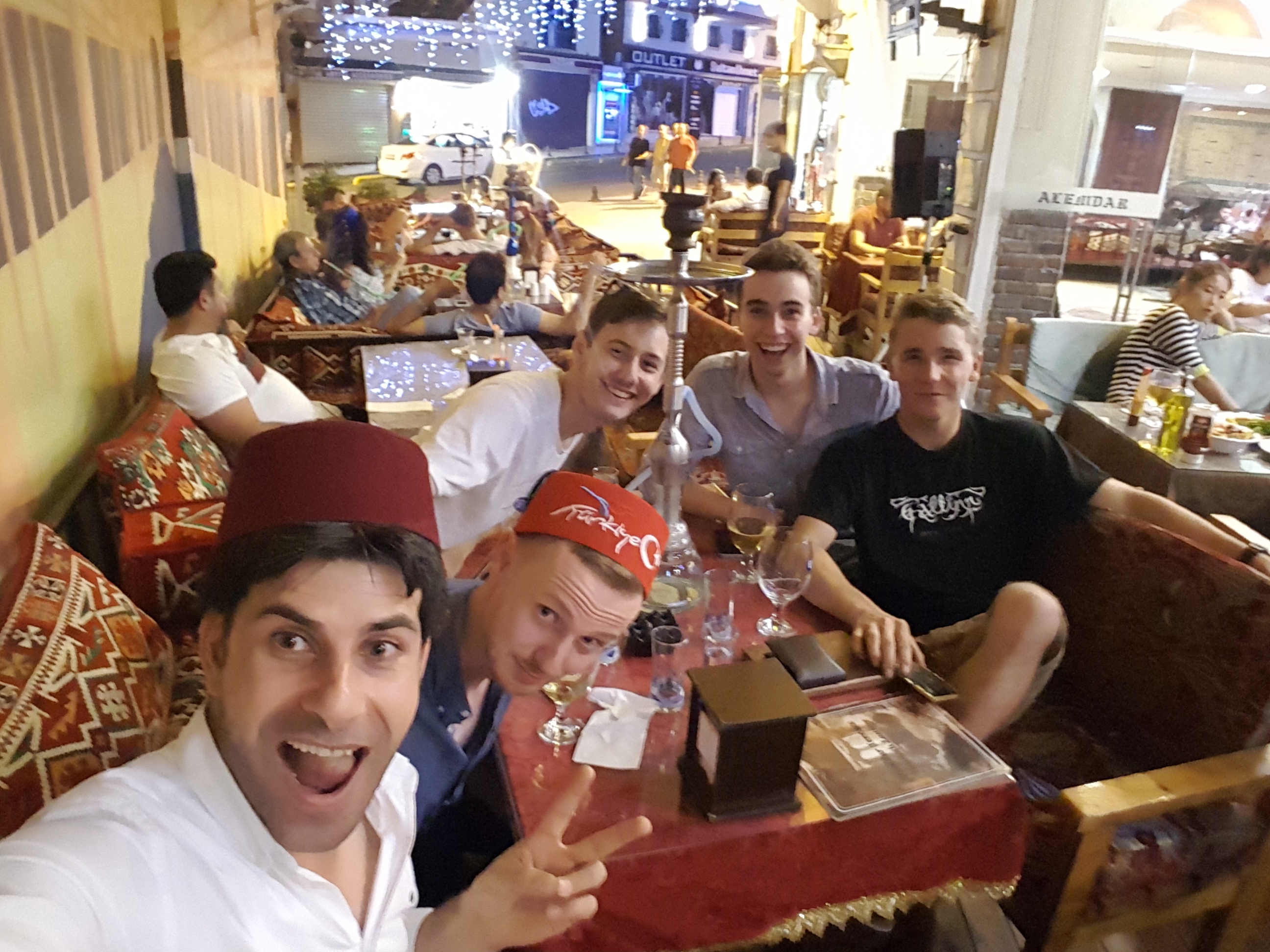 Due to the inebriation of the previous evening, I had been unable to post the ‘daily’ blog. Hopefully that shall be remedied by a rigirous regime of no alcohol (don’t bet any money on this).

We decided to try some of the tourist things today, and chose to see the 1500 year old Hagia Sophia and the Basilica Cistern. 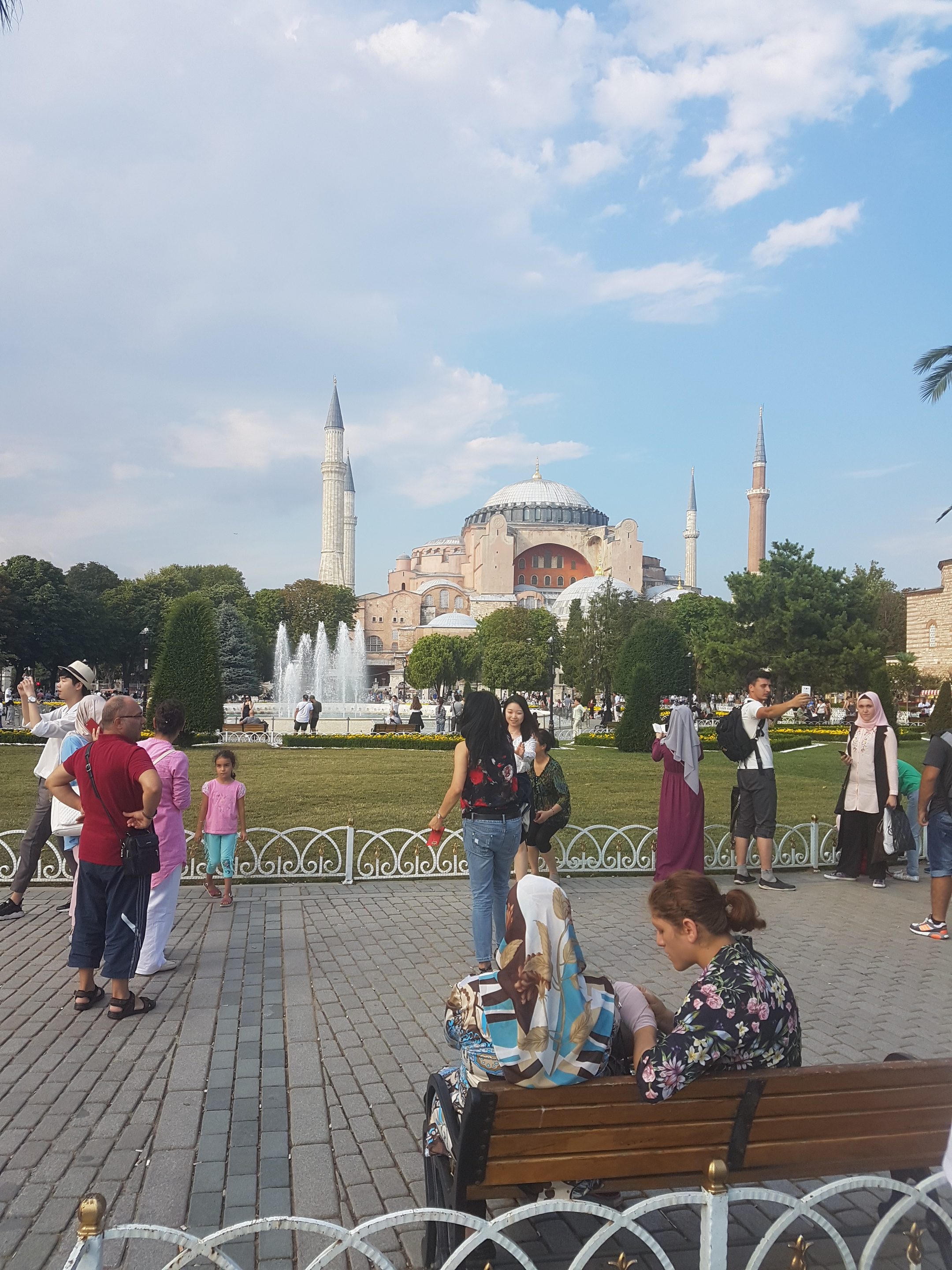 They were both beautiful in their own right, but the experience reminded me of why I don’t generally do these things. Being whacked by selfie sticks as you try to avoid ruining someone elses long distance photo just makes you want to be anywhere else.

After that, it was time to go. We were all itching to hit the road again and see Tina, who had hopefully been protected by Smiley Man. Our hearts were all jumping a little as we rounded the corner, but there she was, safe and sound. The journey continues.

After another sweat-fest I navigated back onto the motorway, and we crossed the cross-continent bridge that separates Asia from Europe. The ”Welcome To Asia” sign flew past and there was silence in the cab as we realised how far we have come, and yet how far we still have left…

Upon arrival in the small town of Gerede in the Turkish hills, we discovered all of the hostels were closed. As we knocked on one of the doors, a man walked past and I approached him.

He spoke absolutely no English, but he called his mate who appeared in about 30 seconds. The new man explained where the hotel’s were, but after a bit of chatting and seeing Tina he offered to host us. As this was said, his mother appeared. She insisted she would cook us dinner, proper Turkish stuff. I spoke to the others but I think they were tired and wanted our own place, so I had to politely decline and ask for a camping spot. The man then got in his car and told us to follow him. He led us into the hills to a beautiful nature reserve/park where pitching your tent is completely legal and free. Tomorrow morning he is coming by at 10am to show us the mountains and some ancient ruins held within them. He drove over 20 minutes to show us this camping, and expected nothing in return. His mother was equally as welcoming, smiling and trying to negotiate with me to let her make us lunch tomorrow.

I continue to be astounded by the love I have found in people throughout the world. All it takes is a little bit of barrier breaking, and if everyone did it that little bit more I think we’d have so many more amazing stories.