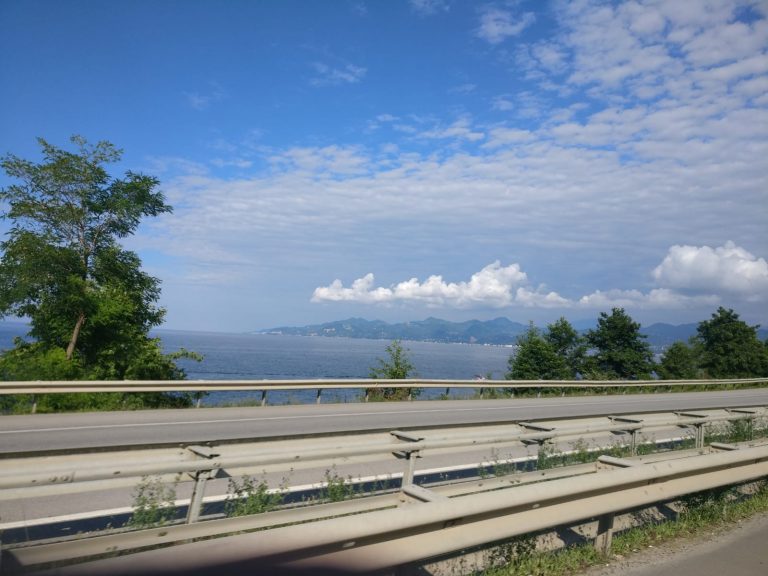 It was a sweaty and muggy night, probably around 25° in the tents. We’re sort of used to it now though, the climate is becoming the norm.

At about 11 Berkay arrived and he set us up on the cable skiing, which was a laugh. And for the inexpensive £3 it cost it was great fun. 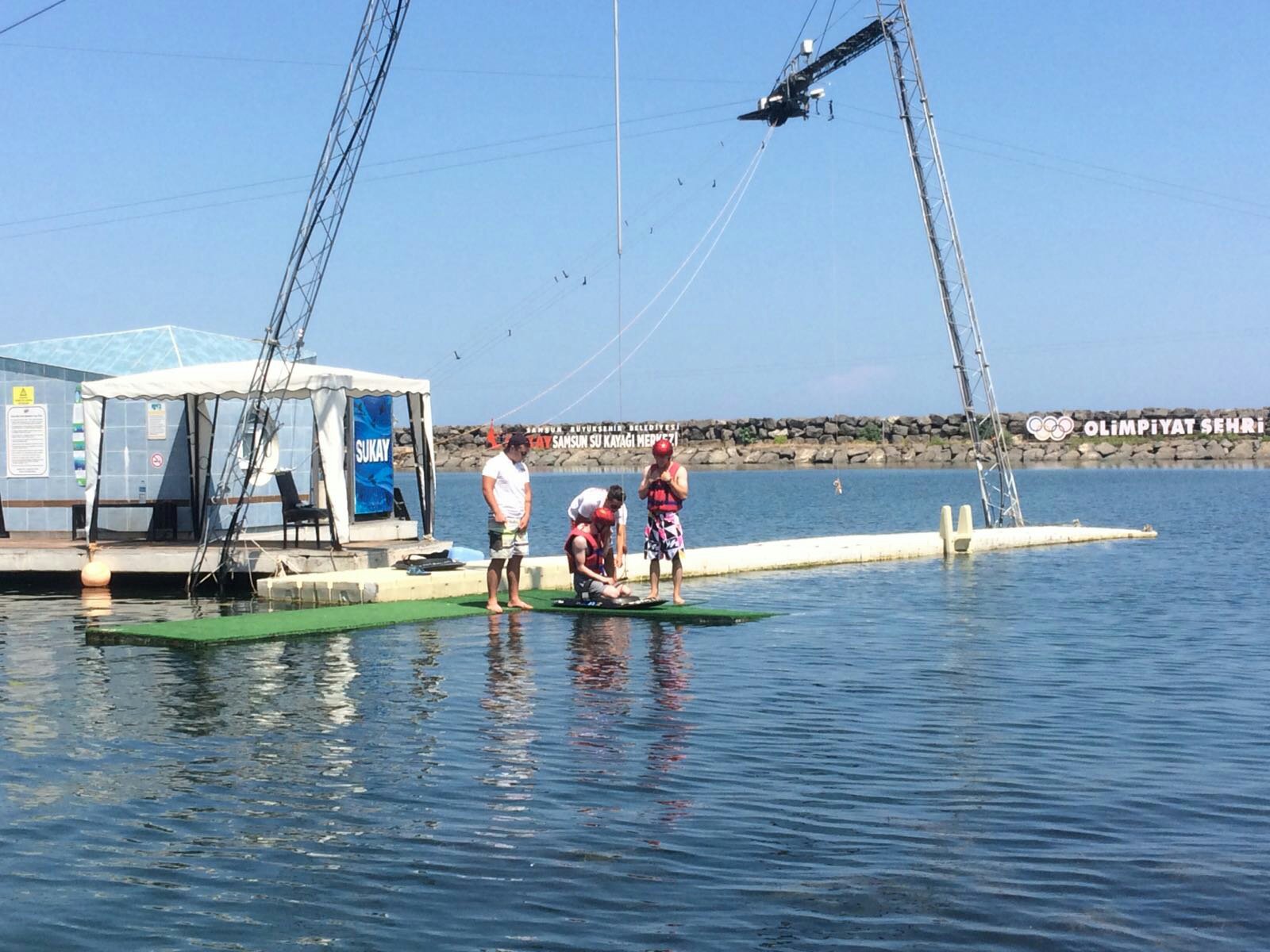 Afterwards, we sadly said goodbye to Berkay and he signed Tina proudly.

A little later, we found ourselves in a restaurant and they didn’t have a menu. I messaged Berkay and he sent me this. 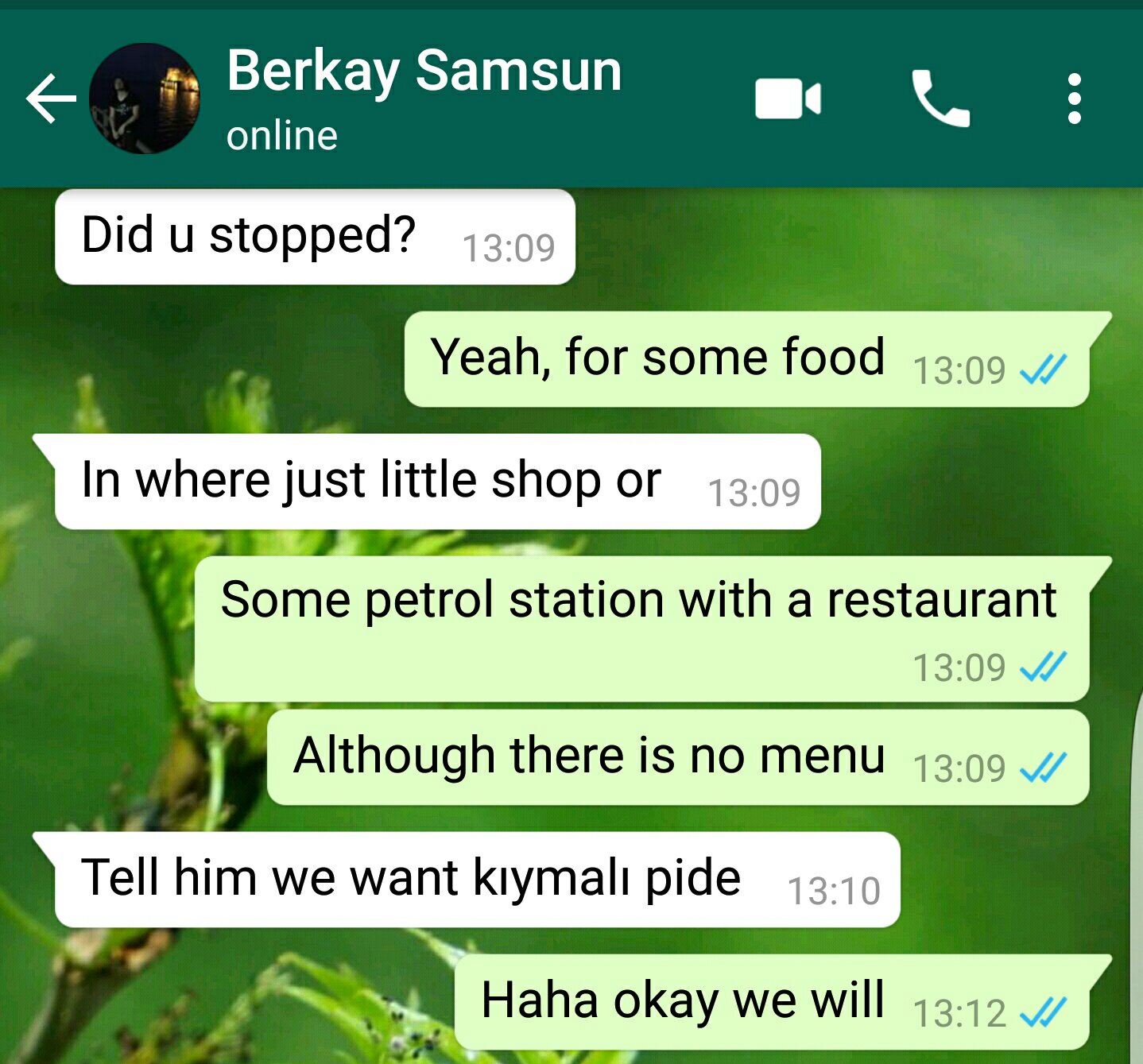 I showed this to the waiter who spoke no English, and put 4 fingers up. He understood and a little later we were presented with delicious bread filled with meat. Props to Berkay for the suggestion. Still no idea what it was that we actually ate.

The drive that followed was 100% coastal road, with the sea on one side and a string of mountains on the other. Yet again, it was spectacular and with a significant amount of caffeine we nailed another 300km. 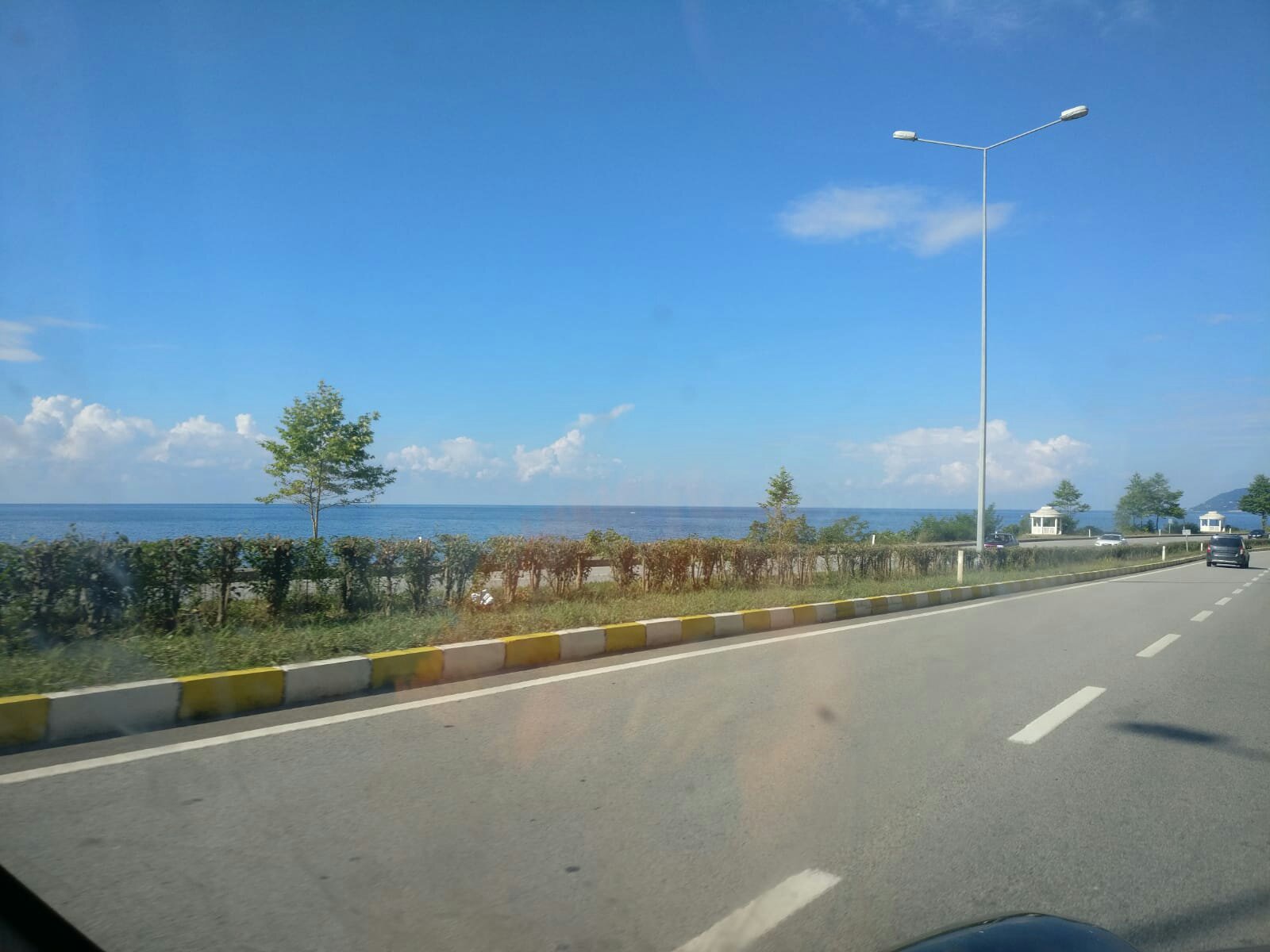 We ended in a small town on the outskirts of Trabzon, speaking to people across the traffic asking where there was a hotel. A thick raincloud hung above us and the cable skiing had delayed our departure date beyond the usual, so it was getting late and looked like it could rain at any minute. Tonight was a night for a luxury hotel.

We stopped at a few hotels but they quoted us nearly £100 for the 4 of us, which around here is extortionate. Finally we stopped at one, and it was getting late. I went in to check the price. The boss started at £100 for two 2 person bedrooms. Getting tired of this, I said no, we will all sleep in one small room and you will charge us £20. Eventually, after much discussion, we got a double room with 4 breakfasts for £40 total. Banging.

Craving beer, we headed out and went straight to the only restaurant in town that actually had the golden elixir. It happened to have a deck overlooking the sea and some beach, however there was a small lorry that had gotten stuck in the sand. 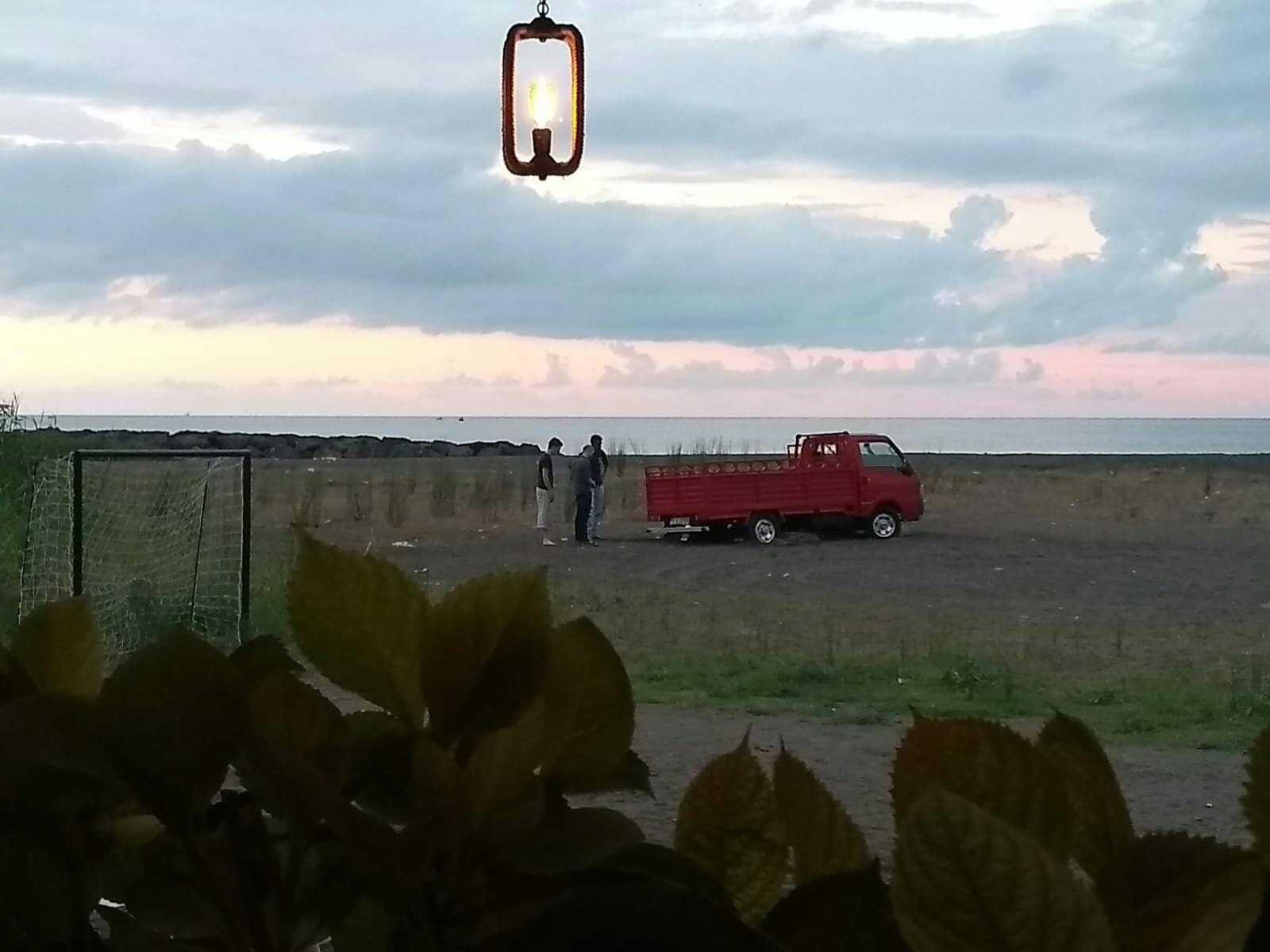 While waiting for the beer to come, Harry and I went over to try and help the stranded man. A guy from Saudi Arabia also came, and he happened to be a pro in sand-disentanglement. After some translation issues, a bit of tyre deflation, and a lot of effort we dislodged the mans van and we watched as he drove back to ‘proper’ roads. He stopped before leaving and came back to shake all of our hands, which Harry captured in a candid: 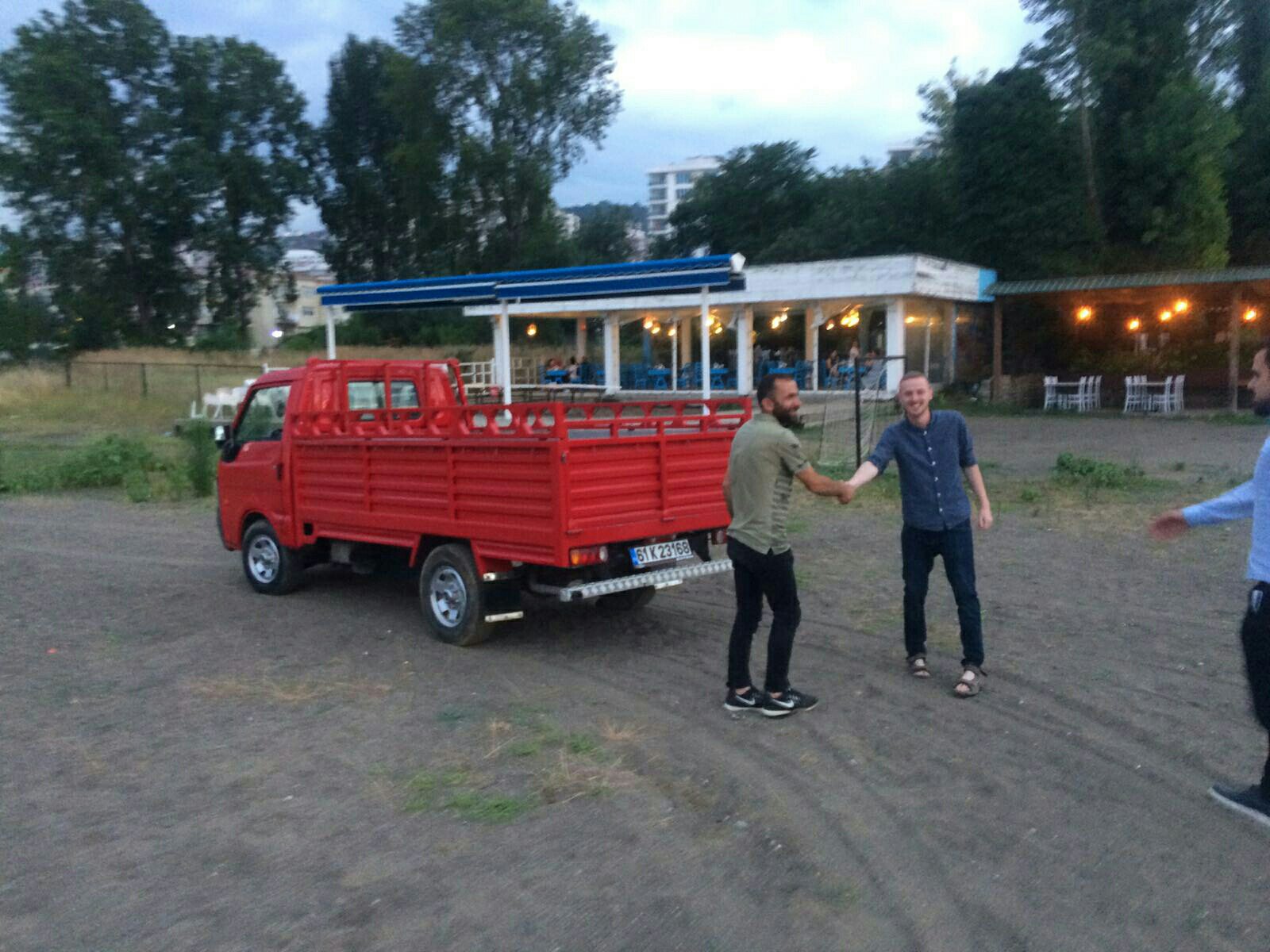 At dinner, there was once again no menu. The waiter offered us a choice:

We have fish, meat, chicken or meatballs. Which you like?

We went for 1 of each, and it wasn’t too bad. The fish tasted pretty great, albeit a tad unfilling. It was literally just a fish and some parsley.

Afterwards we got some more Turkish beers and headed back to the hotel for some cards and drinks.

It’s been a great day with more friends, and more fun. We will visit Georgia tomorrow, which will be a first for everyone.

1 thought on “Coasting along”